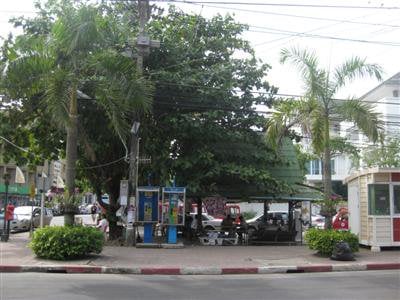 KARON, PHUKET: The tuk-tuk driver wanted in connection with the savage beating of French tourists in Kata last Saturday has gone into hiding, the Gazette has learned.

“Now, the suspect has run away. He is not at his house and didn’t show up at the tuk-tuk parking area as normal,” Chalong Police Investigator Chana Sutthimaat told the Gazette today.

The suspect, whose name is known to police, was issued a summons to come in for questioning after the victims filed a complaint with Chalong Police on Tuesday afternoon.

The family allege the man attacked them with a heavy metal shaft of the type used to support a large beach umbrella in high winds.

The attack followed an argument over a public parking spot that the attacker claimed was reserved for use by tuk-tuks, even though there were no municipal or other signs or markings to designate the space as such.

When contacted about the tuk-tuk situation in Karon today, Mayor Tawee Tongcham said he was aware of the latest incident.

“Initially, I asked the group of drivers there how such a thing could happen. One who witnessed the beating told me the attacker appeared to suffer from minor mental problems. In any case, I need to speak to both parties involved before making a decision about who was wrong and who was right,” he said.

“As for measure to avoid this sort of fighting, I will hold a meeting after New Year’s Day to strictly delineate which areas are reserved for tuk-tuks and taxis and which are open for tourists to park their cars,” he said.

This latest violent incident has spurred a deluge of comments on the Gazette readers forum and has prompted an Internet petition urging the province to ban tuk-tuks altogether and establish a reasonably-priced public transport system.