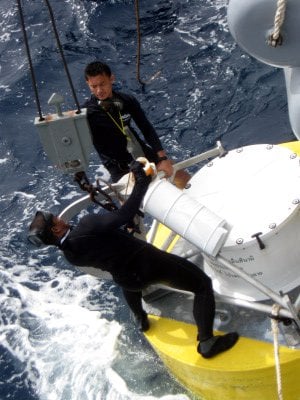 PHUKET: The drifting tsunami detection buoy recovered on Saturday is not as badly damaged as feared and the unit will be redeployed in its original position off the coast of Phuket at the end of the monsoon season, officials say.

The unit was successfully recovered by Navy SEAL divers aboard navy frigate HTMS Bangpakong, which docked at Phang Nga Naval Base at 9am Sunday morning.

A press conference announcing the successful mission was held at the base.

Raydant International is a private firm that was contracted by the National Disaster Warning Center (NDWC) to set up and maintain Thailand’s tsunami warning system, of which the early detection unit is a key part.

In order to carry out the mission HTMS Bangpakong had to have its crane modified to hoist the two-ton unit. The crane is normally used to lift engine blocks, Capt Chalermchai explained.

The navy was able to track the drift of the buoy using GPS information.

Despite heavy rain and high winds, the unit was found using radar technology and then spotted with the naked eye at 6:30am.

The Navy SEAL divers found the unit’s 8-meter anchor chain connected to the much-longer mooring cable, the length of which could not be estimated.

Both cables had to be cut for the unit to be recovered.

The buoy was finally hoisted aboard at 10:45am and HTMS Bangpakong returned to port at 11:30pm the same day.

The other key component of the system, the pressure-sensitive ‘tsunameter’, is presumably still on the sea bottom 3,500 meters below the surface at the buoy’s original mooring site 600 nautical miles northwest of Phuket.

The unit was most likely hit by a passing ship, as indicated by an impact striation. The only other appreciable damage was a broken warning light and missing solar cell, she said.

“I think the buoy must have been hit by a big ship during a storm, because despite its bright yellow color it is still quite difficult to notice in rough seas. The cost of the damage is quite low compared to the total cost of the buoy,” she said.

The unit would be turned off to save its battery power, then it would be cleaned and stored at the Phang Nga base until a redeployment mission is ready.

The NDWC has already ordered a new mooring line 4,500 meters long, 200 meters of electric cable, and a new solar cell and warning light, she said.

She expects the redeployment to take place when monsoon conditions begin to abate, probably around November or December, she said.

Asked if going another six months without a direct detection unit would hurt Thailand’s disaster warning capabilities, she said the NDWC could still access information from units deployed by Australia, the USA, India and Indonesia.

“We routinely exchange the buoy data with these countries. Don’t worry that a tsunami will come without warning,” she said.