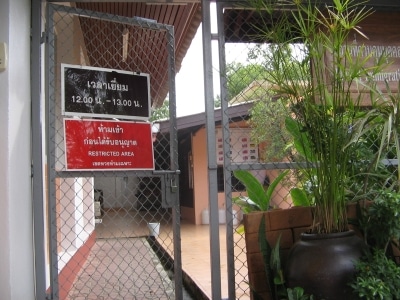 PHUKET: The Thai Immigration Bureau in Bangkok is now arresting and jailing foreigners with long “overstays” before permitting them to leave the Kingdom, ThaiVisa.com reports.

Immigration officers at Suvarnabhumi Airport are apparently fed up with foreigners flouting Thai Immigration law by turning up at the checkpoint with a valid air ticket and the maximum fine of 20,000 baht in hand.

Foreigners whose overstays exceed 42 days now face arrest and a few days’ detention while their cases are processed, said the report.

Those whose overstays fall into a ‘gray area’ from 22 days to 41 days may also face problems. The decision whether to arrest and detain them remains at the discretion of Immigration officers at each border checkpoint.

Although such matters have always been at the complete discretion of Immigration officers at the checkpoint, it is now being “quite unequivocally stated” that those breaching the 42-day limit will spend one or two nights at the Immigration Detention Center (IDC) in Bangkok, the report said.

Thai Immigration fines for overstays are 500 baht per day overstay up to the maximum fine of 20,000 baht – which works out to 40 days.

The old policy actually discouraged foreigners who had already overstayed by 40 days to legitimize their immigration status.

At the moment it is better to clear up long overstay issues in Bangkok rather than in Phuket, Pattaya or elsewhere, ThaiVisa reports.

NOTE: ThaiVisa.com is a business partner with the Phuket Gazette.