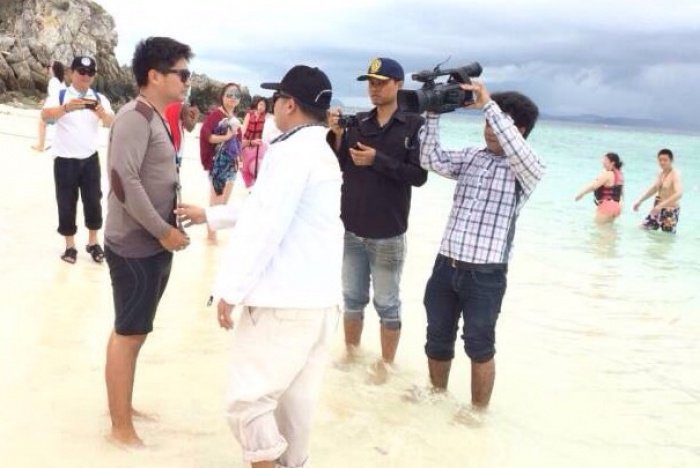 PHUKET: A Thai tour guide caught catching a clown fish so that tourists could hold it at Koh Khai Nai has refused to comment on his behavior after his tour guide licence was temporarily suspended.

The clown fish, which has become incredibly popular with some tourist markets following the Pixar animation Finding Nemo, was in a plastic bread bag being passed around by the tourists when an inspection team from the Ministry of Tourism and Sports (MOTS) Phuket Office arrived at the scene.

“We were following up on a photo posted on Facebook on June 9 of a Chinese tourist holding a fish in a net and posing with it for a photo,” explained Santi Pawai, director of the MOTS Phuket office.

The life jacket being worn by the tourists in the photo were from Nonthasak Marine. However, neither officials at MOTS Phuket office nor Northasak Marine employees were able to identify the guide.

“They had rented out the boat to a different company, which we’ve not been able to track down,” Mr Santi said.

However, while inspecting the area, the team discovered Phuket tour guide Akung Saewang with a group of tourists who were holding a clown fish trapped in a bread bag.

“We will be talking with Mr Akung and Joel Thai, the tour company, tomorrow,” Mr Santi said. “We will not be pursuing further action against them as long as they agree to change their behavior.”

“However, if we catch Mr Akung allowing this again, his licence will be suspended for up to six months. A further infraction will lead to his licence being revoked.”

Tomorrow, MOTS will be demanding that Joel Thai help combat behavior that is damaging to the environment by not only changing the practices of their guides, but also by placing campaign posters on all their boats informing tourists of ethical and legal ways to interact with the environment.

“We want the tour guides to give the right message to tourists,” Mr Santi said.

When contacted by the Phuket Gazette, a staffer at Joel Thai declined to comment on the incident. Mr Akung also declined speak about the matter.