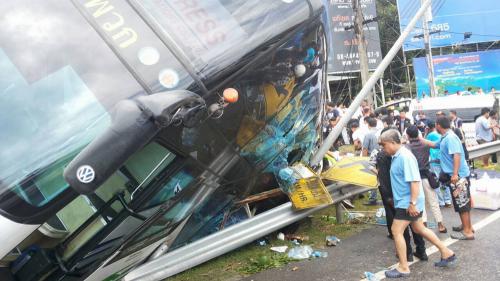 PHUKET: A tour bus carrying students on holiday from Bangkok plunged off Patong Hill this afternoon after failing to make it up the steep incline.

No deaths were reported in the incident, but 38 students were taken to Patong Hospital while six others were rushed to Bangkok Hospital Phuket in Phuket Town.

“One of the students, a Pakistani national, suffered serious head injuries,” said Capt Witaya Sinchumrern of the Patong Police.

More than 20 emergency rescue vehicles sped to the scene at about 2:30pm after receiving reports that the bus had rolled backwards and plunged into a ditch at the base of the east side of Patong Hill.

“There were four tour buses in total, all carrying students from the Asian Institute of Technology in Bangkok,” tour guide Tiwaporn Hongwongpaisarn, 50, told the Phuket Gazette.

“I was on the third bus, but the fourth bus – the one travelling behind us – did not make it up the hill,” she said.

Police have yet to question the driver of the bus, which is marked as belonging to “Tao and Friend Limited Partnership”.

“We have yet to locate him and he has not yet presented himself to police,” said Capt Witaya.