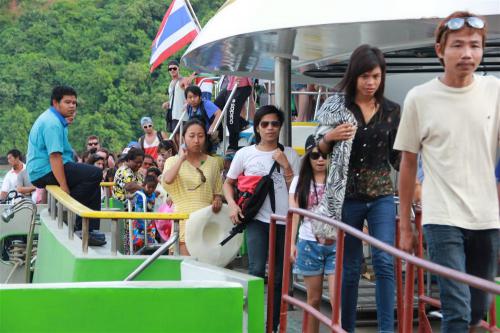 PHUKET: The new commander of the Tourist Police, Maj Gen Apichai Theamart, yesterday led a team of officers on a safety inspection of boats operating at Rassada Pier, on the east side of Phuket Town.

Among the victims of the Pattaya ferry disaster was a 12-year-old Russian boy on holiday with his family (story here).

Officers yesterday inspected boats, their engines, checked registration documents and the licenses of the vessels’ captains and engineering crews.

“We also asked boat operators to ensure their boats are not overloaded and that each passenger vessel has enough life vests for every person on board,” said Gen Apichai, who took up the post of Tourist Police Commander on October 1.

Commander Apichai warned operators that he had ordered his officers to take action on any breaches of marine safety regulations.

“I want to all boat operators to work under Marine Department regulations. If we find any of them not following the regulations, we will arrest them,” he said.

Phuket Governor Maitri Inthusut on Wednesday continued his campaign to boost marine safety as he inspected boats operating to and from Koh Maphrao, off Phuket’s east coast (story here).