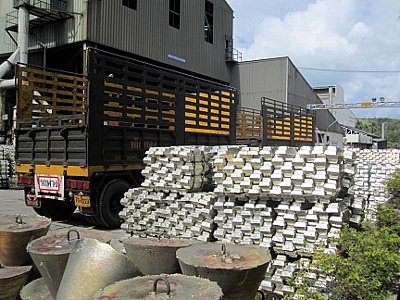 PHUKET: Phuket Vice Governor Somkiet Sangkaosutthirak today led a team of local officials to investigate claims that the Thaisarco tin smelter at Cape Panwa was releasing contaminants into the air, causing lung cancer and other health issues among local residents.

Prapan Kanprasang, head of the Damrongtham Center, which acts as the provincial ombudsman’s office, said his office received a letter of complaint in December.

“The complaint was signed as filed by the ‘Ao Makham villagers’ representative’. The letter claimed that Thaisarco was releasing tin and iron dust into the air, causing air pollution, lung cancer, and windpipe and respiratory problems among local villagers,” he said.

The complaint also alleged inaction by Wichit Municipality, he added.

However, local villager leaders present today told the Phuket Gazette they knew nothing of the complaint.

“I have no idea who filed this complaint. Every time there is a complaint from a villager, we tell the plant. And so far, every time they have responded to us and fixed the problem,” said Sonthaya Utsaha, village chief of Baan Laem Panwa.

“Actually, if there are any fumes from the plant, they head toward the village only when the wind blows from the east, and there is not always dust,” he added.

Village elder Abdulloh Amit was even more glowing about the company’s relations with the locals.

“I’ve been living here since 1974 and the company has always got along with the village very well. Our community has a committee [for relationships] between the villagers and the plant. If anybody has a problem or any complaint, they can come to us directly.

“Anytime I receive a complaint from villagers I contact the staff at the plant, and the problem is resolved quickly,” he said.

Regardless, Vice Governor Somkiet was adamant an investigation should be carried out. “Whether the complaint was filed because of local politics or because the villagers are really in trouble from the air pollution, we must investigate and resolve the problem,” he said.

However, he quickly added, “But if this case is about local politics, we certainly do not want to be used [as a tool of manipulation] as well.”

“The plant has been here for more than 40 years. Our pollution levels are checked every six months by a third party who is approved by Ministry of Industry.

“In fact, in the past few years our pollution levels have been well below the required levels. Our plant produces only 90 micrograms of dust per cubic meter [ug/m3], and the legal limit is 120ug/m3,” he said.

“We used to manufacture 30,000 to 40,000 tons of tin per year. But because Phuket now has a developed tourism industry, last year we manufactured less than 1,000 tons.

“We use only a small furnace now instead of five furnaces like we used in the past. We are surviving only because we order preprocessed tin from Indonesia to add value, and export it to Japan and Europe,” said Mr Panya.

He explained that five years ago the company spent more than 80 million baht on installing a dust filter to minimize the dust released.

“Manufactured tin carries a value of 700,000 baht per ton, and 50 per cent of the dust particles created during the smelting are tin particles. The more dust we release, the more money we lose,” he added.

“Thaisarco is the only tin manufacturer in Thailand. According to our records, over the past few years the plant’s emissions have been under the regulated standard.

“However, since a complaint has been filed about its pollution, we must investigate, even though the plant seems to be managing its emissions well.

“There may be a problem, and we will investigate as ordered,” Mr Charan said.

Kaewkuan Tiengsuthaisasil, an expert at the Phuket Provincial Health Office, said public health records showed that about 1,000 people in the area had suffered respiratory problems.

“However, our records do not show whether the patients’ respiratory problems were from chemicals, dust or disease. To isolate and identify the cause will take money, which we do not have the budget to support.

“Vachira Phuket Hospital has a new device for measuring light, sound and heat. We would need to coordinate with the Phuket Provincial Industry Office and related agencies to conduct such an investigation,” she said.

“The PPHO will work with the Phuket Industry Office to check the pollution levels and report them at the next meeting. At least we have the villagers’ confidence that we are taking action on issues that may be a cause for concern,” he added.

Phuket Convention Center project up in the air – again