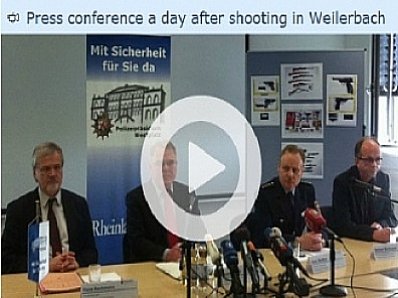 Elderly man kills 2 doctors before killing self in southwestern Germany

The attack took place at around 3:30pm local time on Monday when the 78-year-old man entered a hospital in the small town of Weilerbach, located in Kaiserslautern district in the state of Rhineland-Palatinate, and opened fire.

The elderly man, whose identity was not immediately released but who was reportedly a patient at the hospital’s internal medicine practice area, fired several shots at two doctors in the building, killing both of them. A nurse was injured when he or she was hit by a ricochet bullet, according to Südwestrundfunk.

After the attack, the gunman fled the hospital as police officers attempted to stop him, briefly leading to a chase. But the elderly man managed to reach his house and barricaded himself inside. Security forces later discovered the man’s dead body, apparently suffering from a self-inflicted gunshot wound.

Weilerbach Mayor Horst Bonhagen said the deadly shooting shocked the small town. “It is inconceivable, inexplicable,” he was quoted as saying by local media reports.

The pensioner was obviously suffering from a persecution complex, the Chief Public Prosecutor Helmut Bleh said at the press conference held yesterday in Kaiserslautern. In his house he reportedly hoarded weapons – the police confiscated six rifles and three pistols, none of which were licensed.

A suicide note was also found. “There are to be no memories,” the police quoted from the handwritten note during the press conference. It also stated the man had settled his estate and his son should take care of everything, he wanted to be cremated, but there should be no grave

Weilerbach’s population stands at around 4,600 people.