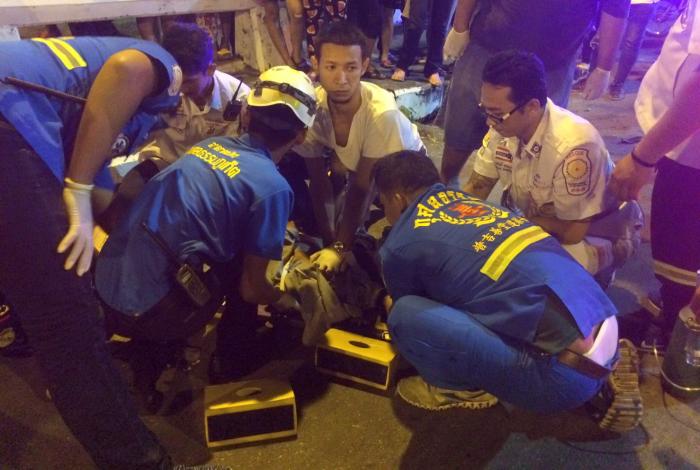 PHUKET: A 14-year-old boy was killed and another badly injured when the stolen motorbike they were riding collided with a car in Saphan Hin last night.

Phuket City Police officers and paramedics arrived on the scene, at the Bang Yai Canal intersection, about 9:40pm.

The motorbike had been stolen from a house behind Rajabhat University on Monday.

The bike’s owner, Kanoot Dumcher, 19, subsequently filed a report of the theft with police and asked permission to check CCTV footage of the crime, Police Lt Chaleaw Thaihoo told the Phuket Gazette today.

“Mr Kanoot and his friend were riding around all day Tuesday, trying to find the stolen bike themselves,” said Col Chaleaw. “When they spotted it, a chase ensued and the fleeing perpetrators were hit by a car that was turning left. The turn signal of the car was on, but the driver is under investigation regardless.”

“When we arrived, a heavily-damaged motorbike was lying near the two unconscious 14-year-old boys. One had a head injury while the other had labored breathing. After CPR was administered, both of the boys were rushed to Vachira Phuket Hospital, where one was pronounced dead.”

The colonel said the motorbike had allegedly been borrowed from the original thief. Both the minors’ names are being withheld by the Gazette.

New Zealand man falls to his death in Phuket