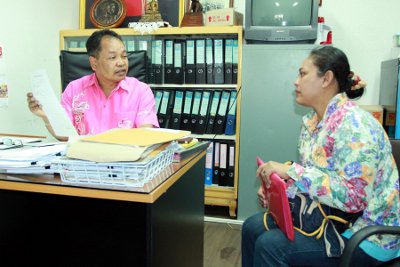 PHUKET: A female teaching assistant at Koh Kaew Child Development Center has been suspended pending an investigation over a mother’s claim that the assistant slapped her 4-year-old son in the face.

Ratkaphat Tonnum, the 41-year-old mother of the student at the center of the incident, told the Phuket Gazette yesterday that she had originally filed a complaint with the Koh Kaew Tambon Administrative Organization (OrBorTor).

Having not heard of any progress, she filed a separate complaint with Prapan Kanprasang, the chief of the Phuket Damrongtham Center (provincial ombudsman’s office) at Provincial Hall.

Speaking to the Gazette, Ms Ratkaphat recounted the incident, which allegedly occurred on November 14.

“After my son had returned home from school I noticed a red mark on his cheek, like he had been slapped or something. I asked him what happened, but he kept quiet.

“After badgering him for about 20 minutes, he finally told me that he was slapped by a teaching assistant at school, causing him to fall off his chair,” Ms Ratkaphat explained.

“The assistant also told him not to tell anyone about it,” she added.

The child’s grandmother took it upon herself to go to the school to speak with the teaching assistant, who denied that she had hurt the child.

“My son told my mother that he does not want to go to school because he’s afraid of being hurt again. He also said that the assistant once locked him in the classroom,” said Ms Ratkaphat.

“I’m not after any compensation from the school. All I want is for the teaching assistant to admit that she was wrong and apologize,” she added.

In response to allegations of physical abuse, Koh Kaew OrBorTor council president Khuakiet Chitkhua told the Gazette that he had not ignored the complaint.

“I have tasked a committee to investigate. Until the allegation has been thoroughly investigated, the teaching assistant in question has been suspended from working at the school.

“If the allegation proves to be true, her employment will be terminated,” said Mr Khuakiet.

Work to commence on the Phuket underpass tonight, footbridge to go