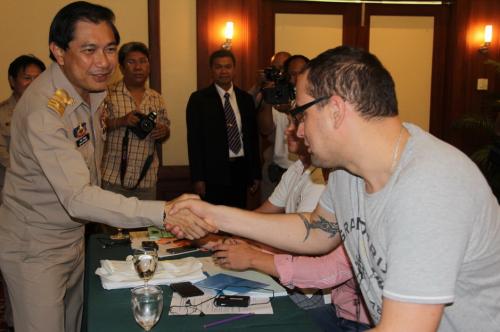 Talks were delivered in Thai and related to attendees by translators.

Another seminar is being held today that will cater to Chinese and Korean tour operators.

“We want foreigners involved in business and working in Phuket to know the relevant Thai laws involved. We want to teach them what is required and also hear about the problems they encounter,” Governor Maitri told the Phuket Gazette.

Governor Maitri explained that the three nationalities were chosen as they represented the leading source markets for inbound tourists to Phuket.

“We chose these nationalities because a lot of tourists from those countries come to Phuket, and these tourists do not speak English, so almost all of the tour operators catering to these markets hire their own native-speaking guides to serve them – and that is illegal,” he said.

By law, only qualified, registered Thai nationals may work as tour guides in Thailand.

“After this seminar, we expect the number of foreigners working illegally in Phuket to decrease,” Governor Maitri said.

Phuket Provincial Employment Office chief Yaowapa Pibulpol explained that the seminar covered the basics in the Foreign Business Act BE 2542, Working of Aliens Act BE 2551, Immigration Act BE 2522, Tourism Business and Guide Act BE 2535, Social Security Act BE 2533 and the Trade Associations Act BE 2509.

“When business owners know, understand and respect these laws, the number of people working illegally in Phuket’s tourism industry will decrease,” she said.