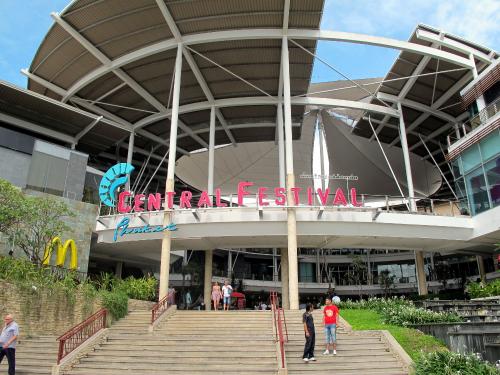 PHUKET: The head of the group of taxis operating out of Central Festival Phuket and his brother have denied using physical violence to extort money from fellow taxi drivers operating at the renowned shopping mall.

Pom Sukkasam, 42, and his brother Sern Sukkasam, 52, were arrested by Crime Suppression Division (CSD) officers on Sunday and taken to Bangkok, where they were presented at a press conference yesterday.

Both men have been handed three charges of extortion, and both men deny them.

Lt Col Somboon Sarasitt of the Department of Special Investigations (DSI) Bureau of Special Crime Region 3 told the Phuket Gazette that Mr Pom and Mr Sern had been arrested because they extorted money from the taxi drivers in their group.

“If drivers failed to pay, they were assaulted,” he said.

Mr Pom, who along with his brother is out on bail and returned to Phuket today, described the allegations as completely false.

Mr Pom believes he knows who filed a complaint against him to the DSI – a member of his group who has repeatedly complained about the group’s rules.

“I have been pushing to make all the taxis at Central Festival legal, but this guy didn’t like it,” he said.

“I’m not mad at him, but I am upset that he didn’t think about Phuket’s image and the reputation of taxi drivers,” he said.

The arrests are the first following the opening of the DSI’s crime centers in Phuket and the publishing of a list of “taxi mafia” figures last month (story here).

On August 9, DSI Chief Tarit Pengdith said that within a month at least one person – on or off the list – would be arrested and punished for his part in Phuket’s illegal taxi operations.

“The Minister of Tourism and Sports, the Royal Thai Police and the DSI are working together in order to crack down on illegal taxis in Phuket and get the ‘big fish’,” said Col Somboon.

“The DSI investigates the illegal taxi business, then hands over the information to the CSD, a division of the Royal Thai Police. The CSD carries out the arrests,” he explained.

The campaign follows multiple complaints from tourists and diplomats. At the press conference yesterday, Tourism and Sports Minister Somsak Pureesrisak said, “I have received complaints from ambassadors of 16 countries, including European countries, the USA, Australia, Japan, China, Korea and India, complaining about tourist scams in Phuket.

“It is creating a bad image for Thailand and putting in jeopardy the 2.2 trillion baht tourism target,” he said.

“We can only reach this target if tourists have confidence that they will be safe here,” he added.

“This is just the start. Our investigation of the figures on the DSI blacklist regarding illegal taxis is ongoing,” he said.

The cleanup project goes beyond arresting those they believe to be guilty. In the case of Central Festival, they will suggest restructuring the taxi system.

“We want the Central Festival organization to take over direct management of taxis there,” said Maj Natapol Ditsayatham of the DSI.

“Tomorrow, the DSI and the Phuket Land Transport Office will meet with Central Festival Phuket representatives to talk about this,” he said.