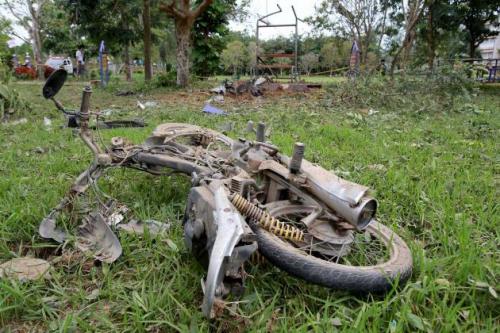 PHUKET: Two soldiers were killed and two others, including a 12-year-old schoolboy, were wounded in a bomb attack at Kanarasdornbumroong 2 School in Yala’s Muang district yesterday.

The bomb created a two-meter-wide, one-meter-deep crater behind a security guard’s booth in the school compound. Police investigation found that a five-strong team led by Prathes was guarding the teachers and students when suspected insurgents led by Roki Doloh set off the bomb.

Meanwhile, National Security Council (NSC) chief Paradorn Pattanatabutr said a new round of peace dialogue with the Barisan Revolusi Nasional (BRN) would be held in the third week of October. He said the Thai negotiating team would submit details of BRN’s five demands to the Committee to Mobilize Policy and Strategy to Solve Problems in the South on Friday.

Regarding the September 5 arrest of two Thai men in Malaysia’s Kedah state for possessing war weapons, Paradorn said Thai Special Branch Police and their Malaysian counterparts were working on getting more information from the suspects. Initial results of the investigation found the two suspects had links to the southern unrest.

PHUKET: The Pollution Control Department (PCD) will seek permission from the Supreme Administrative Court to delay the declaration of environmentally protected areas of Tak’s Mae Tao River Basin, that have been affected by cadmium contamination for decades.

PCD’s measures to rehabilitate the cadmium-affected villages would cost Bt438 million. Its appeal to the Supreme Administrative Court follows a decision by the Phitsanulok Administrative Court last month ordering the National Environmental Board (NEB) and PCD to declare the Mae Tao River Basin as an environmentally protected area within 90 days.

PCD director-general, Wichien Jungrungruang, said his department could not work within this period to designate the cadmium-affected villages as environmentally protected zones because many procedures were required for the zone designation. “We need at least three years to work on this,” he said.

Citing guidelines set by the Office of Natural Resources and Environmental Policy and Planning (ONEP) for an environmentally protected area, he said the department must draft the plan and hold public hearings to listen to local opinion. Then it would submit the plan for the NEB’s deliberation before issuing the declaration.

The International Water Management Institute and Agriculture Department reported cadmium contamination in the Mae Tao River Basin in 2004. After getting no response from agencies, 31 residents lodged a complaint with the Phitsanulok Administrative Court. They claimed agencies, including NEB on December 11, 2009, allowed a zinc mine to operate in their upstream area. According to the complaint, the mine spread cadmium over paddy fields in tambons Mae Tao, Mae Ku and Phra That Pha Daeng.

Even though the department plans to file an appeal to the Supreme Court, Wichien said the NEB had ordered agencies such as the Industry Ministry and Agricultural and Cooperatives, to restore the affected areas.

Under PCD’s recovery measures, 248 rai of tainted soil will be dredged up, while over 3,566 rai will be covered by a plantation. These measures are expected to be worked on as soon as possible, Wichien said. Separately, the level of hazardous chemicals in waters around Koh Samet after the July oil spill is now lower than standard criteria. Officials said the seawaters were safe for swimming and diving – except for the Ao Phrao area.

Push for legalization of kratom
The Nation / Phuket Gazette

PHUKET: Relevant authorities have decided to push for the legalization of kratom (Mitragyna speciosa), an herb that for years has been included in the prohibited narcotics list.

Tomorrow, a committee tasked with the development of kratom policy/law will officially recommend that Justice Minister Chaikasem Nitisiri ask the Office of the Narcotics Control Board (ONCB) via the public health minister to consider three options:

– Declare that kratom is just a psychoactive substance;

– Come up with ways of maximizing the use of kratom for economic benefits if it decides to continue including the herb on the narcotics list.

“The committee has already discussed this issue with representatives of relevant authorities including the National Security Council and the Food and Drug Administration,” ONCB secretary-general Pongsapat Pongcharoen said yesterday in his capacity as the panel’s chairman.

He added that the ONCB, meanwhile, would continue researching the impact kratom users might have on national security.

FDA deputy secretary-general Viroj Verachai said yesterday that if the ONCB agreed to remove kratom from the banned narcotics list, then the public health minister had the mandate to immediately announce its removal.

As per the report, 11,339 kilograms of kratom has already been seized this year and most of the users were farmers and workers aged between 15 and 24. The report revealed that in Australia kratom was described as a herb containing controlled substances – alkaloids – while in the US, kratom is openly sold in shops for about Bt1,000 per packet.

However, the sale of this herb is controlled in Malaysia and Myanmar. In Malaysia, the Mitragyna genus in kratom is included in the list of controlled substances and any possession of it for sale is punishable by two years in jail.

Pongsapat said if the kratom was legally listed as a psychoactive substance, the authorities would need to ensure that kratom is not processed into more powerful drugs. “Chewing kratom leaves can be allowed provided they are not processed or mixed into anything else,” he said.