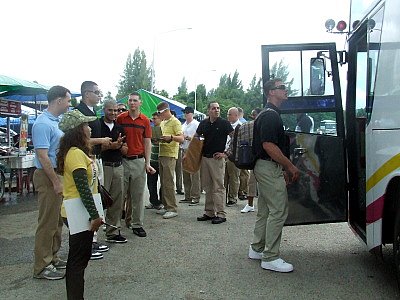 PHUKET: More than 4,000 United States Military personnel arrived at Phuket’s Deep Sea Port yesterday with no reports of transport problems as they made their way to destinations around the island.

Several times in the recent past, taxi drivers at Ao Makham blockaded the Deep Sea Port, preventing passengers from cruise ships and US Military vessels from venturing into Phuket. The drivers protested the fact that local tour companies provided transport for the passengers who disembark at the port, leaving them with no work or income.

Taxi drivers and tour operators on August 16 signed an agreement to end the blockades. Under the terms of the agreement, the taxi operators and tour agencies serving the port are to have “equal access” to arriving passengers, with no more than a “10 per cent difference in share”.

The tour companies also agreed to inform the taxi cartel one day in advance when tours were scheduled to arrive in Phuket and how many passengers were expected – so that sufficient taxis would be available.

Wichit sub-district Deputy Mayor Chairat Kumban said yesterday that “There have been no more problems between taxi drivers and tour companies following the signing of the MoU. Everything is fine. The companies have been informing the taxi drivers about the situation.”

Many of the men and women of the amphibious-ready group booked tours in Patong and were transported by a pre-booked company. Cars were available for high-ranking officers and vans and buses for others.

“The ships informed us that they had their own transport, so we didn’t have any problems with that,” Mr Chairat said.

“There are many people arriving today, so taxis from other areas had to come in because there are only 190 registered taxis, transport vans and tuk-tuks in Ao Makham,” Mr Chairat said.

As the US sailors and Marines boarded the buses and vans waiting for them, tour company representatives tried selling them tour packages by showing pictures and providing brochures.

Many of the men and women of the USS Boxer group – about 1,500 sailors and 2,500 Marines from the 13th Marine Expeditionary Unit – volunteered to paint a fence and wall at Muang Phuket School today and Wednesday. The ships are scheduled to depart Phuket on Thursday morning.

The sailors also plan to relax in Phuket.

“We are very much looking forward to enjoying the beaches, people and culture. I want to thank the Kingdom of Thailand and all its people for this opportunity to visit,” USS Boxer Commanding Officer Capt Kevin P. Flanagan told the Phuket Gazette during a visit to the Third Naval Area Command in Phuket yesterday.

“I haven’t heard of any taxi blockades at the pier. We are not afraid of Phuket and are very happy to be here as we have a lot of friendships here,” Capt Flanagan said.