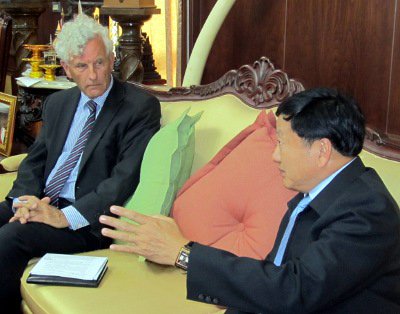 PHUKET: Critical issues affecting Phuket tourism must be contained, or else the industry could “slide out of control”, the Dutch Ambassador to Thailand warned yesterday.

On his first official visit to Phuket, Ambassador Joan Boer asked Phuket Governor Tri Augkaradacha what he intended to do about the problems, specifically naming jet-ski rip-off scams and unscrupulous tuk-tuk drivers as the key culprits.

Likening the potential effect on tourism to a landslide, Amb Boer said, “Everything starts moving very slowly, but soon you have critical mass and things start moving out of control. And that’s what we have at the moment

“Just look at the number of complaints about jet-skis and the very unfortunate event two weeks ago when two boys got into big problems over 1,000 baht. That’s not good for us and not good for Phuket,” he said.

Amb Boer pointed out that Spain and Greece had suffered similar problems.

“In tourism, if there is no security and no predictability – then cheap prices will not help you at the end of the day,” he added.

“We have our consuls’ meeting once every three months and tuk-tuks are one of the most pressing issues that need to be resolved. This has been an issue in Phuket for a long time. We cannot fix this problem in one step; it needs to be done little by little,” he said.

“We have to accept that the problem involves people who are supporters of a local [“influential person”], so when we order them to do something to solve the problem, it doesn’t go very well – that’s why we have to do it step by step,” added the governor.

But some progress has been made, said Gov Tri, explaining that many jet-ski operators were being brought into the system, and hence under regulation.

Steps are also being taken to address other issues, he added.

“Parking is another problem. Some local people [in Patong] do not allow tourists to park in public parking spaces. If any tourists park in their areas, they damage the vehicles,” he said.

“But now we are solving the problem. We are finding areas for tourists to park. I have talked to the police and they are taking steps to resolve this issue,” Gov Tri said.

In gaining what he called “co-operation” from local people, Governor Tri made plain that his powers went beyond canceling locally-issued licenses.

“If the police cannot do anything to resolve either of these two issues [jet-skis and tuk-tuk drivers], I have the authority to contact the central government in Bangkok to request help.

“Bangkok can send people with the power to do something about the problems, even call in the military,” Gov Tri said.

“I would be very happy to ask questions that come from the consular meetings – which we think are a very good idea – to the central government as well,” he said.

“Problems that play here may play out at another level,” Amb Boer added.