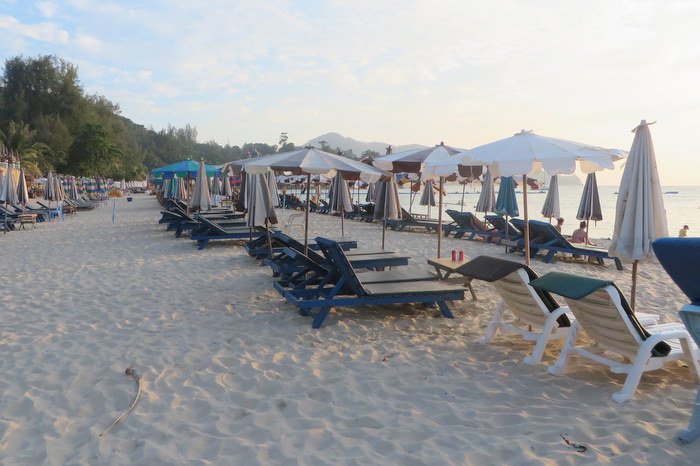 PHUKET: A twist of fate may be in the cards for Phuket’s abandoned sun loungers, with island officials aiming to decide by the end of July whether or not to allow them all back on the sands.

Governor Nisit Jansomwong revealed to the Phuket Gazette last week that a beach management research team at Prince of Songkhla University (PSU) Phuket campus is evaluating the results of the three-month trial period for the beaches’ 10-per-cent vendor zones, which was launched by the governor in December.

Governor Nisit has stood firm on his strict beach management plan since the new rules were implemented, but has told the Gazette that he understands not everyone is happy.

“I am aware that some foreigners need sun loungers for convenience. However, some do not want them. We must consider all opinions on the matter,” he said.

“I personally like Phuket as it is now. We have come so far. Towels and mats are allowed on the beach, and even umbrellas are allowed within the beach zones. Is this not enough?

“Regardless, we will do what experts think is best for Phuket. We want all Phuket locals and tourists to be happy, not just some.”

In December, Gov Nisit delivered the news of the three-month trial run for the 10-per-cent beach vendor zone, which laid down a stringent list of conditions under which beach vendors were permitted to return to work (story here).

Though the trial originally started in Patong, it was expanded to cover all of the island’s beaches in February (story here). Inside the zones, umbrellas are permitted.

Gov Nisit assigned a research team of professors from PSU to monitor the beach-trial period, evaluate results and reactions and come up with the best solution to the problem.

“Before the trial for all beaches ended in May, the researchers asked for an extension. They are still evaluating the information they have gathered during this time,” said Gov Nisit.

“If the experts suggest that we bring sun loungers back to the beach, we may do that. However, they would be chairs that could be removed from the beach every day.”

Gov Nisit expects to have made a final decision by the end of July, but insists that the current rules hold in the meantime.

“At this point, sun loungers are still not allowed on the beach,” he confirmed.

“We should be able to announce whether or not sun loungers will return to the beaches by the end of next month.”