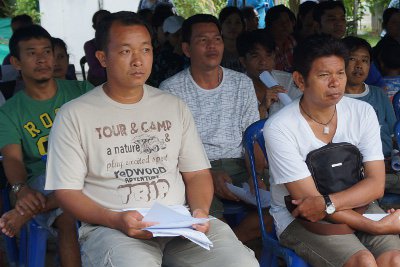 PHUKET: More than 400 employees of the formerly named Evason Phuket & Bon Island resort today staged a protest in front of the hotel in Rawai after learning that they had all been sacked – with immediate effect.

Warin Sungkong, who presented himself as vice president of the Phuket Island Union, told the Gazette that the employees first noticed that the hotel stopped accepting room bookings at about the beginning of May.

“Then we started to get doubts and we finally they set up a group and filed a complaint to the hotel to ask them to explain them what was going on,” he said.

Mr Warin said today’s action followed the hotel owner repeatedly postponing a meeting to explain to employees what lay ahead in their employment.

“First he said he would come and explain to us on May 11, and then he postponed to May 18 and then when the day came, he sent us a report again saying that he wanted to postpone to May 24.

“We had been told that all of us would be laid off at the end of this month, but today he might have noticed that we started to gather together to protest, so at about 3pm his representative called us – about 400 people – to come to the resort’s function room.

“And he [the representative] told us that we had been fired – all of us,” said Mr Warin.

The union spokesman said the hotel staff were told that the company had been experiencing dwindling profits and that management could not afford to keep them on.

“But we don’t believe that, because we have heard that they are going to transfer the hotel to another owner, and that owner wants to renovate the entire hotel, so they fired us,” Mr Warin said.

“We have been working for the hotel so long, and most of us are 40 to 45 years old. Now we are jobless and we don’t know how can we find a new job because we not young anymore. Most of us have a family and children, and now we have no idea how we are going to support our families,” he added.

Mr Warin acknowledged that the employer said the employees would be paid out in accordance with Thai labor law.

“But what we learned just today is so urgent, and we haven’t prepared at all, so we want them to be responsible for this, and at least they have to pay us more,” he said.

A meeting at the Phuket Provincial Labour Protection and Welfare Office has been scheduled for 2pm tomorrow, at which the hotel owner and the workers are to try to come to an agreement, Mr Warin added.

The resort is the original “Grande Dame” of Phuket, being the first resort to open on the island nearly three decades ago under the name Phuket Island Resort.

Since then the hotel has won many awards for its service, locale and ambiance, as well for its range of eco-friendly projects.

The resort is closed tonight.

No information has been released as to where the guests at the resort are staying since the events of this afternoon.

Lifeguards back on Phuket beaches on Monday