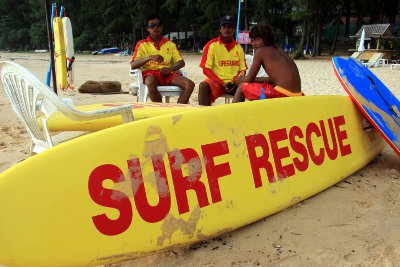 PHUKET: Phuket’s lifeguards will be back on the beaches on Monday, an officer at the Phuket Provincial Administration Organization (OrBorJor) confirmed to the Phuket Gazette this afternoon.

Kanyarat Senrung, an officer at the Phuket OrBorJor Tourism Department, today said the contract between the OrBorJor and the Phuket Lifeguard Club was signed this morning.

“The only delay now is that we need time to hand over the equipment to the club,” she said.

“There will be 33 lifeguard stations, just as there used to be, and the lifeguards will be on duty from 9am to 7pm as is stipulated in their contract,” she explained.

The news today follows two people, both French tourists, drowning at Phuket beaches in the past week.

The body of Stephane Dacosta, 33, was recovered from the waters off Freedom Beach yesterday morning.

Another French tourist, named by Chalong Police as 53-year-old Angelo Piazza, was pulled unconscious from the surf at Karon Beach on Friday.

He was pronounced dead at Patong Hospital.