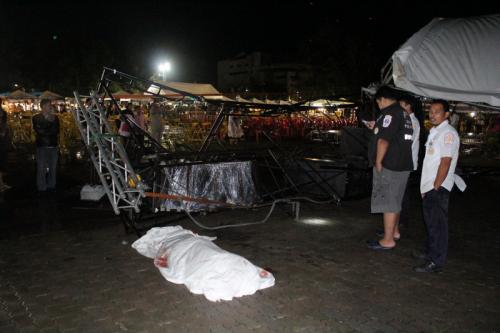 “Witnesses told police Mr Muhammad brought a chair to sit close to the stage so he could be protected from the rain,” said Capt Udom Petcharat of Phuket City Police.

“Then a strong gust of wind pulled down the awning covering the stage. As it collapsed, scaffolding knocked a large stack of speakers about 10 meters high onto Mr Muhammad, knocking him to the ground,” he added.

“Residents were evacuated to safe houses and we will send officers to inspect the damage and to estimate what repairs need to be made,” said Tawatchai Thongmung, chief administrative officer at Phuket City Municipality.

Nanthira Bamrungsuk, 64, said she was out collecting her niece from an after school tutoring class when the tree came crashing down.

“Normally, there are four people at home, but luckily no one was home when the tree fell,” she said.

Phuket’s DJ Doris out of ICU