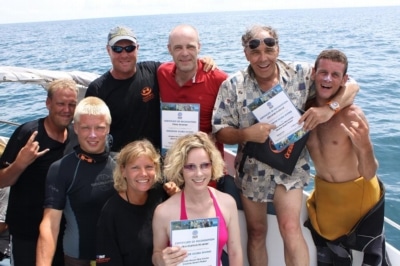 PHUKET: Last month, the cast and crew of TV romance adventure The Dream Hotel celebrated completion of filming in and around Phuket for the German-speaking movie, which will be broadcast in Germany and parts of Scandinavia to approximately 12 million viewers in 2010.

Dream Hotel is a popular German-speaking travel documentary TV series that highlights luxury resorts in exotic locations around the world.

The show is often responsible for rises in tourist numbers in its featured locations following its broadcasts in Germany, Austria, Switzerland and Scandinavian countries.

The scenes shot in Phuket will become part of a 90-minute movie with a cast of well-known German-speaking actors and a plot that involves a treasure hunt in which people mysteriously go missing.

The story begins in Chiang Mai and ends in Phuket with several diving scenes, including the recently sunk Coral Reef Squadron resting in the waters off Bang Tao Beach.

However, none of the cast’s main actors – including Ann Kathrin Kramer, Heinz Hoenig and Gunther Gillian – were proficient scuba divers. In fact one of the actors was ‘petrified’ of diving as he had previously had a bad diving experience, sinking to the bottom with a heavy weight belt that wouldn’t undo. So Lisa Film Produktion GmbH enlisted the help of certified dive instructors at the Orange House dive center in Bang Tao run by Ted Sivert.

The actors were given initial scuba training by Orange House divers in a swimming pool before moving on to shallow waters just beyond the surf. A handful of divers were also used as doubles for some of the deeper underwater shots.

Asked what was the most challenging aspect of the production, the answer was always the same: visibility. The crew would sometimes spend hours hanging around on the surface waiting for the right conditions.

Shooting was originally planned to take place in the Maldives, but for a number of reasons, including bureaucratic hurdles, Phuket became the location of choice.

Although Phuket already provides a stunning backdrop, the creative director was at liberty to add a few extra props here and there, including an extra palm tree on the beach.

Apparently, the synthetic tree looked so real that it even fooled some of the locals, who were amazed to see one of the crew simply lift off its top.

David Spiehs, owner of Lisa Film Produktion GmbH, also brought his family along. When his five-year-old boy saw David scuba diving, he said to his dad, “Daddy, I want a bottle!”.

As for real treasure hunting in the region, according to Ted, there are a lot of undiscovered wrecks out there. You just need the means to go out and find them.