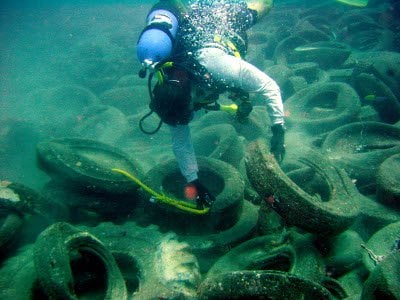 PHUKET: Go-Eco Phuket, a recently established marine environmental group, has announced that it is now looking to stage the biggest PADI “diving for debris” reef cleanup project on record on September 30.

The event has escalated from what was originally expected to be a reef cleanup carried out by a coalition of several PADI dive centers on the island to becoming one the largest dive against debris project in PADI’s history.

The project is sponsored by PADI and the Project AWARE Foundation, a nonprofit group established by PADI in 1989, which held its first International Cleanup Day in 1993.

The Go-Eco Phuket project gained momentum on Monday after a meeting with several government offices including the Phuket Marine Biological Center, Phuket Provincial Administration Office, the Marine Police, the Department of Marine and Coastal Resources and the Royal Thai Navy Region 8. The meeting concluded with the various offices offering their full support the project, said Mr Andrews.

Department of Marine and Coastal Resources donated a speedboat for the day as well as two dinghies to transport non-divers to the beach for the beach cleanup.

In addition to some other logistical support, the Marine Police will escort the dive boats for protection and the Royal Thai Navy Region 8 has assigned four Thai Navy SEALs for security on a liveaboard boat. The liveaboard boat will be staying overnight off one of the islands as dive professionals attempt to raise larger pieces of rubbish, explained Mr Andrews.

The project currently has 13 dive boats and more than 200 volunteers registered. However, with the number of interested participants, the group is looking for more boats to be donated to the cause.

Currently, only five of the 13 boats have corporate sponsors: Hilton Phuket Arcadia Resort & Spa, Rumblefish Adventures, British Business Association of Phuket, Reef Check and Skål. Corporate sponsorship is 15,000 baht and covers the cost of the fuel for the boats, the use of which have been donated to the cause by several dive companies.

In conjunction with the reef and beach cleanup, the Society Environment Economy Knowledge (SEEK), local environmental group established to create continuity within the “green movement” in Phuket, has volunteered to establish and run a pre-dive education program for local school children.

The program is expected to run for about an hour on Chalong Pier. During the program, students will have the opportunity to learn about the importance of the reef and beach cleanups as well as take part in their own cleanup in Chalong.

The reef cleanup is also sponsored the Phuket Gazette and will be covered on national television (UBC/True Visions, channel 99) by the Gazette‘s new show Phuket Today. The show airs six times per week. For the schedule, see October’s True Visions programming guide.

Phuket businesses interested in joining the Tourism Authority of Thailand and the Gazette as a sponsor of “Dive Against Debris” are invited to contact any local PADI dive center, or Tony Andrews, Regional Manager of PADI, at Tony.Andrews@padi.com.au