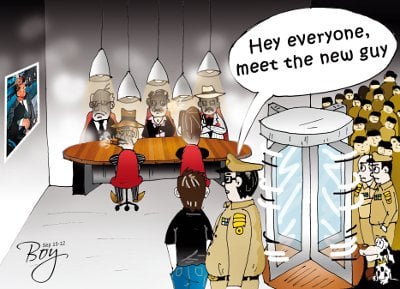 PHUKET: After eight months serving as Phuket’s top-ranking police officer, Chonasit Wattanvrangkul will be transferred out of the province to continue his career elsewhere. At the same, at the end of this month, Phuket Governor Tri Augkaradacha will retire.

While Col Chonasit’s replacement will be Narathiwat Provincial Police Commander Maj Gen Chote Chawanwiwat, a replacement for Governor Tri has yet to be named, just weeks before he retires.

The Phuket Gazette understands the need to rotate government officers in and out of Phuket, but as Governor Tri points out (see Letter from the Governor in this week’s issue of the Phuket Gazette), transferring officers too quickly after arriving in Phuket only does the province harm. The officers never get the chance to come to grips with the unique nature of Phuket that sets it apart from Thailand, never mind actually formulating and rolling out policies for the long-term benefit of the province.

Even if they were able to get that far, they would be unlikely to be around when the policies-cum-campaigns are put into action. As with Governor Tri’s “last stand” on fire safety, he will not be here to see the fruits of his efforts. He will not be here to enforce the building inspections if his underlings fail to properly carry out his orders.

To be blunt, very few high-end officers stick around long enough to suffer the embarrassment of their actions or inaction, let alone any potential legal consequences. Of course, that may well be the intention. But it does beg the question of exactly what criteria the performance of such officers is reviewed on, with so little time for their work to have any effect, positive or otherwise.

A good case in point is the Sirinath Marine National Park land probe ordered by Damrong Phidet just weeks before his retirement. After all the hours of prime time TV coverage and all the ink spent on reporting the alleged encroachment, not one official has been named. The Gazette would be surprised if this were to change, despite the stated willingness of the investigators to publicly reveal the names of the resorts and companies they accuse of encroaching on park land.

In the meantime, a French businessman stands to have his multimillion baht villa demolished, even though officials have admitted, quite openly, that the man has done nothing wrong.

The Gazette sympathizes with the new incoming governor, whoever he or she may be. How can any official prepare for taking up the role as the leading official in a province, particularly one as important as Phuket, on such short notice?

Meanwhile, for better or for worse – you be the judge – it will be business as usual for the resident forces at work here in the land of so many virtues and disappointments.

Phuket Opinion: Setting standards for everything