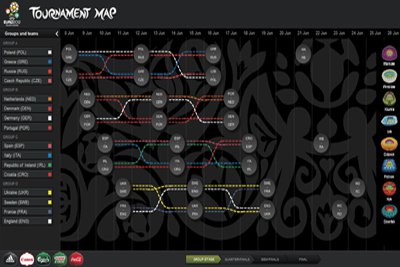 PHUKET: The 2012 UEFA European Championship is set to kick off in Warsaw this Friday and this year’s Championship looks set to be one of the most closely contested in recent history.

Four years ago Spain, who until then were labeled as perennial underachievers, started the tournament as clear favorites and duly delivered on years of promise. Their slick brand of passing football simply starved the opposition of control of the ball and their pressing when they lost it was exceptional.

However, this golden generation is a little bit older and a little bit slower. Xavi and Iniesta still have their passing radars working, but it can’t be denied that they have aged a little. Spain will also be without their talismanic striker David Villa, which means Fernando Torres will need a “big tournament” if Spain are to be as potent as they were before.

Germany must fancy their chances of claiming their first title since 1996. They, along with Spain, are the only nation to play with the cohesion of a club side and can boast an exciting and youthful team whose swift counter attack, when in full flight, is something to behold. Mario Gomez will have to put the horror show that was his Champions League final behind him if Germany are to have a shot at winning.

Sitting comfortably as the third best team is the Netherlands. The Dutch are still some way behind the top two but are themselves some way ahead of the chasing pack.

They possess pacey wingers and fullbacks, as well as the most in-form striker in Europe, Robin van Persie. However, a defense that is prone to errors has been their Achilles’ heel for a while now and might be exposed by teams willing to open themselves up and have a go.

The draw has been kind to some of the smaller nations, with Netherlands, Germany and Portugal placed in the same group. Both co-hosts have a realistic chance of getting into the knockout stages with favorable groups, particularly Poland. However their group is perhaps the most evenly matched in the tournament.

France and England will be eagerly awaiting their clash as the winner could avoid a giant in the next round. Although both sides possess quality, one expects luck will have to favor these powerhouses if they have any chance of lifting the trophy.

The congestion of quality teams makes for the most exciting international football tournament in the world, and as Denmark in 1992 and Greece in 2004 showed, reputation means nothing when 22 footballers have the world’s eyes on them.

Thais in Phuket confident in English skills, but foreigners disagree