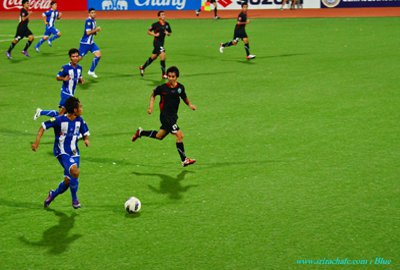 FC Phuket were taken for an unpleasant ride by the Sriracha Suzuki FC “Blue Marlin”, with the “Southern Sea Kirin” succumbing 4-2 in a grueling away match on last Sunday evening in Chonburi.

The fixture was played in front of about 1,000 fans at Suzuki Stadium, situated some 20 kilometers north of Pattaya.

Among spectators were a few loyal “Hulk” fans who had endured the overnight trip from Phuket, only to return home empty handed.

Sriracha scored four unanswered goals with three strikes in the first half and one on 60th minute. Phuket managed to gain some respectability scoring two goals in the twenty minutes.

The result moves Sriracha up into fourth place of the 18-team Thai Yamaha League 1 (TD1), while Phuket plummeted to a lowly 15th.

Kickoff is expected at 4pm at Surakul Stadium

Other results last weekend saw newcomers Krabi FC seize top rank honors of TD1 table after prevailing in their away match against Bangkok United 0-1 thanks to a 51st minute goal by Soukaphone Vongchienghkham.

Soukaphone, a 20-year-old Lao national, leads the “Andaman Eagles” with three goals so far this season.

The season’s biggest upsets so far were also recorded over the weekend with a 2-5 home-loss by Korat to PTT Rayong; 5-0 demolition by Bangkok FC over JW Rangsit and 4-0 pummeling by Suphanburi over Chanthaburi.

For a full match report, see the Phuket Gazette, on stands this coming Saturday.