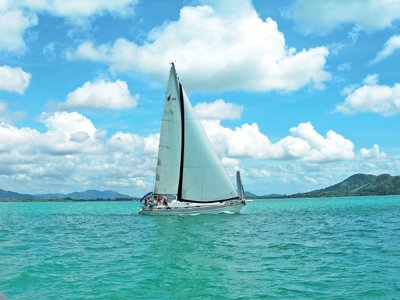 PHUKET: One of the shortest courses ever set was organized for the second race of the Ao Chalong Yacht Club (ACYC) Irish Times Race Series.

On Saturday, David Liddell from Miss Saigon spent several hours practicing his starts and it paid off. At the horn, Miss Saigon was the first across the start line, the only boat to complete the full course length and earn line honors as well.

The rest of the fleet were shortened to a single loop with Mark Horwood’s Iruvai’s course shortened even further. Peter Wood from Windstar was another to get a tremendous start, but it wasn’t long until Adam Tepper on board Linda had picked up the pace and passed Windstar.

Towards Ao Makham, Linda, trailing Miss Saigon, was pulling away from Windstar, but after rounding the mark, Linda didn’t have a spinnaker and was quickly passed by Windstar clearly identifiable by her colorful kite.

Disappontingly, Windstar finished the day in third place overall with Miss Saigon finishing second 12 minutes ahead on adjusted time. Bill Sax on Astraeus took the day’s glory having the largest performance increase over last Sunday’s race. Because of the new handicap system, an overall winner can be produced by combining both Multihull and Monohull results.

Despite the wind falling away towards the end, Iruvai managed to finish the race and even though Rob Azzopardi’s crew disappointingly failed to show up, he set out by himself. Although a little late to the start line, sailed the course single-handed.

Bill Sax has taken the initiative to organize another Koh Racha cruise/race in three weekends time on March 24-25.