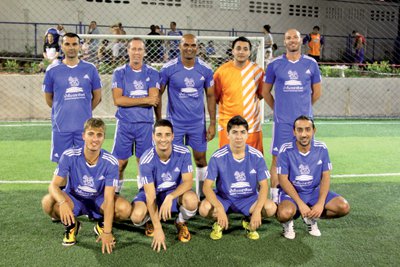 In an even game, Aladdin took an early lead with goal, but Eden FC pressed back and were soon two goals ahead from strikes by Joseph Arimathea and Zac Remboldt.
Aladdin clawed back the advantage, and at 3-3 the game ignited. Against the run of play, however, Eden FC scored the final goal to claim their first victory of the season. Aladdin v Eden FC: 3 – 4.

Hampered by injuries, Rugantino were unable to withstand a determined Morning Star team in the second match on the schedule.

A balanced start soon gave way to a commanding Morning Star performance with scores from Pedro Carrera and Simon Smith. With no available substitutes, the Rugantino team capitulated as Morning Star pummeled their opposition’s goal net a total of 14 times. James Saunders chipped in with five goals while Einar Bangstad proved his worth in the middle of the park for a slowly rising Morning Star. Morning Star v Ristorante Rugantino: 14 – 2.

Undoubtedly the most exciting affair of the evening was that of the youthfully exuberant encounter between Shakers FC and Pita Bar Phuketeers. Several yellow cards were shown in this tense battle, but on the scoring front it was Shakers FC who took the lead with a Tom Davies goal. Phuketeers responded almost immediately from a goal by Yannik Christll to ensure level scores going into the break. In the second half, Shakers went ahead with a goal by Mikael Lundin and it looked as if this slender lead would be enough for a win. But the Phuketeers kept their heads and an equalizer by Carl Brain ensured a share of the points. Shakers FC v Pita Bar Phuketeers: 2 – 2.

Nanai Boys continued their climb up the table, with a well-deserved 5-2 win against The Lounge in the round’s fourth match. A physical Lounge team initially deterred Nanai Boys, but skills overcame brawn to help put Nanai Boys up 3-0 with goals by Aniel Debie and Sam Aleksandrov. The Lounge replied with two goals of their own to offer a glimmer of hope which only gave Nanai Boys the impetus to grab two more for a memorable win. Nanai Boys v The Lounge: 5 – 2.

Babynoname were also aiming for their first win of the season in their match up with Phuket Serenity Villas (PSV) in the last game of the night. A thrilling first half saw PSV go ahead with two goals by Watcharapong Somsong, only to have their advantage canceled out by two quick Babynoname scores. From the start of the second-half, PSV pulled their game together and with three solid strikes confirmed their value at second place in the league. Babynoname v Phuket Serenity Villas: 3 – 5.

This week sees the rivalry between The Lounge and league leaders Shakers FC to be played out. PSV will face the unbeaten Morning Star, while third spot Rugantino are up against Nanai Boys.