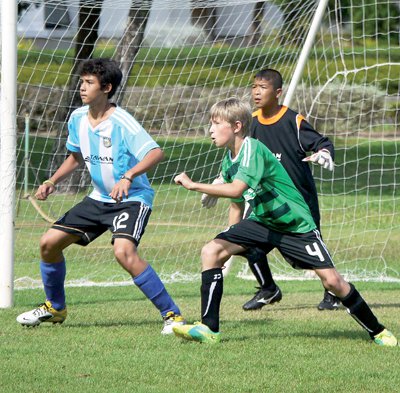 PHUKET: THE 2012 Fair Play League (FPL) held its penultimate round of matches at British International School last week with both U14 and U11 Divisions in action.

All three games in the U14 section were played at the same time on three different pitches at the ground. Thailand put in a fine performance against league leaders France and romped to a 5-1 victory.

Germany Green reclaimed their place at the top of the table with a 7-2 win over a depleted Argentina team. Germany White pulled off a shock result by beating an in form Brazil 7-5 to claim their first win of the season and in the process crush Brazil’s chances of claiming the title.

Next Sunday’s final matches see France and Germany Green face each other in a “winner takes all” match to determine the U14 Division champions.

The Under 11 division then took center stage with each team playing two games during the afternoon. The first set of matches saw the top two teams, Brazil and Germany Green, battle it out for pole position in the championship. In a tight affair, both teams defended passionately. The teams eventually canceled each other out with the final score ending 0-0.

Argentina continued to show form with a fine 6-2 win over France and Thailand showed great spirit by coming back from 3-0 down to grab their first point of the season drawing 3-3 with Germany White.After a short interval, the second set of matches got under way. Brazil grabbed what could be a league defining victory scoring in the final two minutes to get a 4-3 win over Germany White.

It proved to be a profitable day for Thailand as they secured another point in a 4-4 draw with France. Germany Green played a good game and clinical finishing enabled them to claim a 4-0 victory over Argentina to stay on the tails of Brazil.
This ensures that the winners of the division will not be decided until the final day of the season.