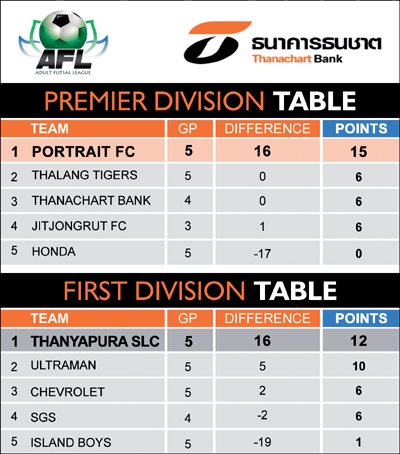 PHUKET: The Adult Futsal League (AFL) saw Portrait FC edge a little closer to the Premiership title while Thanyapura lost an opportunity to put more daylight between their pursuers.

In second spot before the game, Thanachart Bank faced Portrait FC in a crunch tie that would influence any possibility of catching the league leaders. In a similar start to their first encounter this season, both teams erred on the side of caution by keeping their defense deep and counter-attacking on gaining posession.

The Thalang Tigers, in fourth place before kick off, were up against Honda, a team clearly not firing on all cylinders this year, a fact reflected by their motionless state at the foot of the table. Despite their poor record, the Honda boys put in a good battling performance.

However, with eight minutes left to play and Thalang ahead by a score of 4-2, the match was interrupted when a power outage caused the floodlights to fail. The disruption was felt more by the Honda players, who were certainly playing better football than their opponents. After a 15-minute delay, the game resumed, but the break seemed to benefit Thalang as they claimed a 5-3 victory that also moves them into second, in place of Thanachart with both teams on six points. However, Thanachart does have a game in hand while fourth place Jitjongrut FC has two games in hand. Thalang Tigers v Honda: 5-3.

In the First Division, a depleted Island Boys team put up a good fight against a powerful Ultraman team, but poor finishing let them down and led to a 4-1 defeat. A vital three points for Ultraman would have greater importance if Chevrolet could steal a draw or a win in the last match of the evening against leaders Thanyapura (TSLC). Ultraman v Island Boys: 4-1.

Undefeated before the game started, TSLC’S players knew that Ultraman were now breathing harder down their necks and needed a win to hold their five-point advantage. But Chevrolet were out of the gates faster and within five minutes had scored twice for a 2-0 lead going into the break.

As expected, TSLC came out strong in the second half and an early goal narrowed the margin. Chevrolet responded immediately to return their two-goal advantage, but a double-strike by Thanyapura seemed to have sealed a draw. With only a minute remaining, however, Chevrolet were gifted the win and all three points by a Thanyapura own goal. Chevrolet v Thanyapura: 4-3.