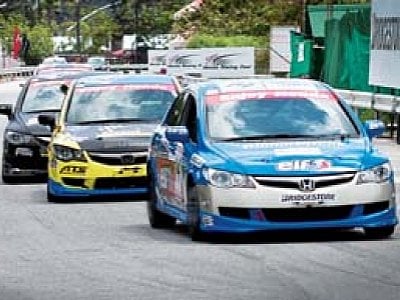 PHUKET: A round-up of Phuket’s sporting action and players.

The 22-year old had secured a place for the premier open wheeler support category to the Singtel Singapore Formula One event and managed to finish in 8th spot on the Saturday, just 4.072 seconds behind the race and eventual meet winner, A. Yazid.

Dylan managed to improve in round-12, held on the Sunday, gaining 6th place, though some seven and a half seconds off the pace. It should be noted that Young’s team mate C. Siebel, did not finish this round

Dylan has local Phuket luxury car dealer Auto Express to thank for his position on the grid and represents the Phuket Has Been Good To Us Foundation.

The Irish Times series took to the waters off Ao Chalong Yacht Club for race threewith five boats in the hunt for honors.

Good winds met the crews on a course which was set to take the fleet around Koh Dokmai Island. Multihull class competitors were quick off the mark and after initial problems, Roger Kingdon’s Moto Inzi took first place.

Colin Robertson won the event with his catch of a 12.2kg Mekong catfish. Jan Van Anderson caught the most fish with three Mekong catfish, two redtail catfish and one Siamese carp.

The annual event is part of Honda’s nationwide racing circuit where over 60 Honda vehicles are seperated into five categories.