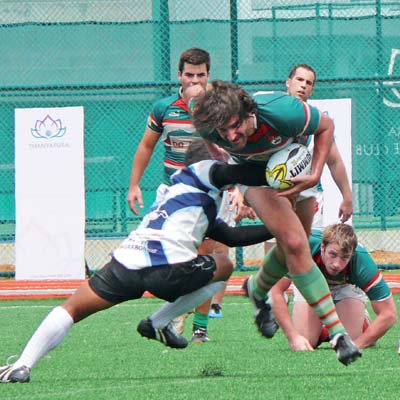 Using the International Rugby Board (IRB) approved synthetic surface at Thanyapura Sports and Leisure Club, Bedok Kings and DEA Tigers from Hong Kong, the Singapore Bucks and host club Phuket Vagabonds descended on the facility in Thalang for 40 minute games in a round-robin format.

Also on the card were under 13 and under 15 challenge matches pitting the Phuket Lomas and Krabi in their respective age groups, but rescheduled exams put paid to Krabi travelling and the juniors were left to challenge each other.

DEA Tigers and Singapore Bucks got the tournament underway and a midfield rucking battle ensued. The difference in the end between the teams were three breaks from the backs which yielded a scoreline of 15-0.

Phuket Vagabonds and the Bedok Kings took to the heating arena next, and although Phuket scored first, Bedok proved too strong and ran in three tries and converted one for a 17-5 victory. Sadly for Phuket, their captain Dan Ashbum was injured in a tackle and had to retire from the tournament for treatment.

The Lomas under 13’s and under 15’s then combined for a match which provided the senior players respite in the covered grandstand from the inferno outside, and also entertainment from the youngsters, who exhibited some wonderful running and handling skills.

With three games remaining for each team to play it became glaringly obvious that the heat was already taking its toll and a decision was reached not to play the cup and plate finals, and simply conclude the tournament on a league basis.

In game three, DEA Tigers notched up their second victory with a 17-0 win over the Bedok Kings. The tournaments’ fourth game highlighted the Vagabonds struggle for players, going down 31-5 to the Singapore Bucks. Game five between the Vagabonds and DEA Tigers was reduced to a 10s encounter with the Hong Kong club securing another emphatic win. In the end, DEA Tigers were declared winners of the first Heineken Thailand sponsored Phuket rugby challenge trophy. Singapore Bucks took second place with Bedok Kings and the Vagabonds filling third and fourth places respectively.

Awards for the first Phuket Rugby Challenge Trophy event were handed out to the Lomas and Bedok Kings at Thanyapura Sports and Leisure Club by Giles Leonard, director of operations.

Later at the Aussie Bar in Patong owner, Steve Wood presented the trophy to DEA Kings.