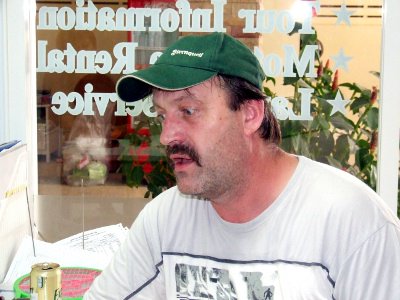 PHUKET: Another Phuket tourist is believed to have fallen victim to ‘drink spiking’ in Patong last night by a woman who made off with his valuables as well as the room safe, but made sure his passport was returned.

Arndt Schneider, 47, from Germany, went out Tuesday night to a bar along Soi Sansabai to play pool with a friend who was on holiday with him, he told the Phuket Gazette.

At about 7:30am on Wednesday Mr Schneider took a Thai woman he had met that night back to his apartment.

“When she and I got in the room, I had a beer and just a few minutes later I fell down. I did not know what was going on,” he said.

Mr Schneider woke up at about 5am today to find his apartment room safe gone, along with the valuables inside: almost 10,000 baht worth of different currencies (baht and US dollars), ATM cards, and his passport.

He later he found his passport in one of the shoes that he’d placed outside the room.

The apartment receptionist reported the theft to Patong Police, who came to examine the room this morning.

CCTV footage, shown to the Gazette and Mr Schneider by the apartment owner, showed him and the girl arriving at the room at 7:26am.

The footage showed the same woman leaving the room at 8:17am and looking around the apartment building before returning to the room.

At 8:19am, the woman left the apartment with a black plastic bag that police presume to have contained the room safe, before she returned empty handed 10 minutes later. She is thought to have stayed in the room until later that afternoon.

The video footage also shows a different woman stopping outside the room at 9am to place Mr Schneider’s passport in his shoe.

Mr Schneider is due to return to Germany on January 25, after giving a statement to the Patong Police.

“Get the gunmen off our streets’: Phuket Governor