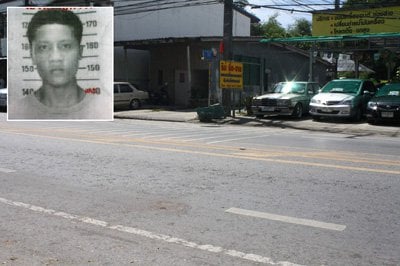 CHALONG, PHUKET: A drinking session outside a mini-mart ended in the drive-by shooting murder of a Nakhon Sri Thammarat man early this morning.

At 6:30am Chalong Police were notified of a shooting near the entrance to Chao Fah West Soi 55.

Arriving at the scene, across from the Infinity Car Finance Shop, investigating officers including Chalong Police Superintendent Chinnarat Rittakananond found a crashed motorbike with no license plates; a car parked with a bullet hole in it; and a large pool of blood on the street surface.

The wounded, both men, had already been rushed to Wachira Phuket Hospital.

One of them, 21-year-old Tawatchai Khuankiri from Nakhon Sri Thammarat, died en route from a single .38-caliber gunshot wound to the back of the head.

The other, his 23-year-old uncle, Suridech Blengjidsatien, also of Nakhon Sri Thammarat, sustained a gunshot wound to the arm.

Under the seat of their motorbike police found a ‘sparta’ knife with a 50-centimeter blade.

Subsequent investigation revealed that Suridech was drinking outside the Rungnapa minimart on Patak Road, not far from Chalong Circle, the night before.

He ended up in an argument with a group of six men who were also drinking there.

He returned to his home near the Dowroong School in Wichit, where he asked Tawatchai to join him and return to the supermarket for drinks.

When they returned to Rungnapa, the men were still there.

The two men eventually left, but they were apparently trailed by two youths on another motorbike.

After they rounded Chalong Circle, the pair came up from behind and the pillion rider drew a gun and shot twice, hitting Suridech in the right arm, causing the motorbike to crash.

As the two men lay on the road, their assailants stopped and the shooter walked up and shot Tawatchai in the back of the head.

The two youths then drove off in the direction of Phuket Town.

Police are investigating and presume the shooting was the result of Mr Suridech’s earlier altercation at the mini-mart.