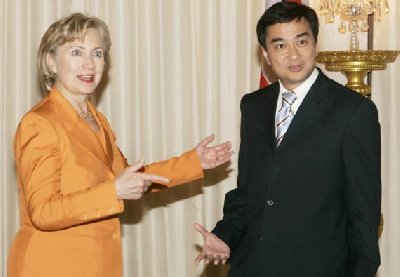 PHUKET CITY: It has not yet been finalized whether the 15th Asean Summit in October will be moved out of Phuket, Prime Minister Abhisit Vejjajiva said in a surprise announcement on Saturday.

Pending further information from the state agencies concerned, the government would make the decision about the venue later this week, the prime minister said.

The comments contradict a remark by Foreign Minister Kasit Piromya two days earlier that the summit would be moved to the twin resorts of Cha-am and Hua Hin, south of Bangkok on the Gulf Coast.

Mr Kasit said that the Asean meetings coinciding with Phuket’s annual Vegetarian Festival was one reason for the change.

The Ministry of Foreign Affairs is in charge of planning the event.

However, PM Abhisit said Cabinet would consider several factors, including tourism and the Vegetarian Festival, in making its final decision.

The dates of the summit would remain unchanged, as October 23 to 25, he added.

CEPEA would include all Asean states plus China, Japan, South Korea, India, Australia and New Zealand.

The result would be the world’s largest economic bloc, surpassing the US and European Union.

The grouping would not only strengthen their regional trade relations, but wean member states off imports from outside the region.