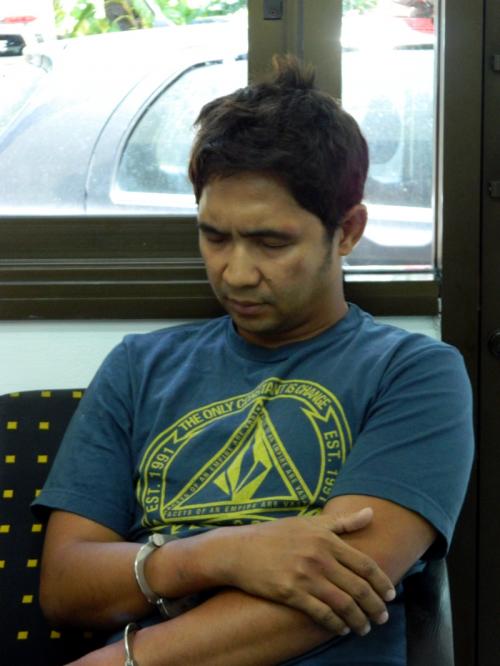 PHUKET: A serial resort thief down on a “holiday crime spree” in Phuket from Bangkok has only confessed to two thefts of high-end resorts on the island, but police believe more confessions will be forthcoming.

Ritthimeth Singhaumpai, 33, and his girlfriend Sasithorn Seekam, 22, were arrested on May 1 for robbing guest rooms in five high-end Phuket resorts.

“We have collected such strong evidence that I believe he will confess to all of the hotel thefts,” Lt Col Somsak Thongglieng of the Patong Police told the Phuket Gazette today.

The robberies in question started in February and extended through April. Mr Ritthimeth robbed some of the hotels twice, explained Col Somsak.

At the time of his arrest, CCTV evidence linked Mr Somsak to five resort thefts. Police today were able to confirm that he also robbed the Bliss Hotel in Patong on March 11, using a master key to enter a guest room and empty the safe (story here).

Mr Ritthimeth and Ms Sasithorn both served prison sentences for breaking into a car in Bangkok and stealing valuables in 2011, Col Somsak told the Gazette.

Police caught Mr Ritthimeth by identifying the Mercedes E200 sports sedan he drove to the robberies. Though the car captured by resort CCTV cameras was white and Mr Ritthimeth’s car was black at the time of the arrest, the license plate numbers were the same. Police later discovered that Mr Ritthimeth had covered his car with sheets of black stickers.

When they arrested him at Jungceylon parking lot, police recovered a variety of stolen goods in the trunk of the Mercedes, including jewelry, electronic devices, debit cards and cash (story here).

Mr Ritthimeth is currently being held by Karon Police and will be transferred to Patong police for questioning next week, said Col Somsak.