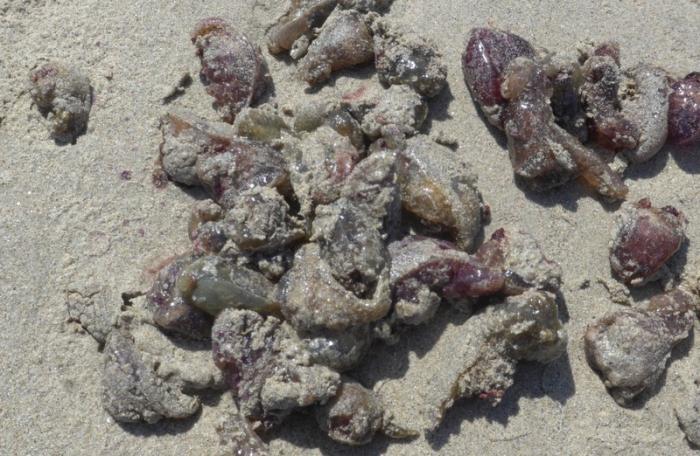 PHUKET: The millions of sea hares that washed onto a Phuket beach yesterday (story here) were part of a mass spawning due to a slight increase in the temperature of the sea.

“It is normal during warmer months for the temperature to rise just enough to trigger a spawning response in sea hares. The animals die shortly after spawning, which is why they washed up on Kamala Beach,” explained Somkiat Khokiattiwong, director of Phuket Marine Biological Center. “These animals are not a health hazard to tourists, though the spawning has been known to give the sea a pink tint.”

This is not the first time a mass spawning of sea hares has occurred in Thailand. A similar occurrence was recorded in Prachuap Khiri Khan Province in 2009, prior to the coral bleaching outbreak in 2010.

“Warmer water temperatures can result in coral bleaching. When water is too warm, corals will expel the algae (zooxanthellae) living in their tissues, causing the coral to turn completely white. This is called coral bleaching. When a coral bleaches, it is not dead. Corals can survive a bleaching event, but they are under more stress and are subject to mortality,” explains the the United States National Oceanic and Atmospheric Administration.

However, the increase in temperature at this point is part of a normal annual cycle that will see the temperature rising until May, confirmed Dr Somkiat.

“Nonetheless, we are still concerned about the rising temperature, as it is higher due to the effects of El Nino in the Pacific last year, which is impacting Southeast Asia during the hot season,” Dr Somkiat said. “We are always concerned about the health of our corals, which is an area being managed by the Department of Marine and Coastal Resources.”

Dr Somkiat noted that mass sea hare spawning has also been previously documented by the Philippines and Indonesia.

Foreign tenants told to go to court for property dispute