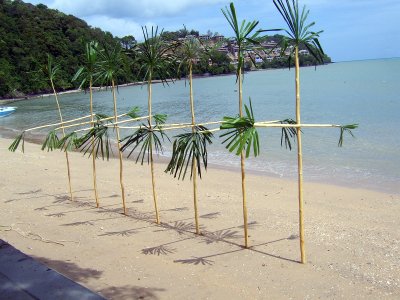 PHUKET: Phuket sea gypsies will pay their respects to the ocean as part of the annual “Boat Floating” festival next week.

The event, organized by Rassada Municipality, will take place at Baan Laem Tukkae sea gypsy village on Koh Sireh from October 21 to 23.

Rassada Municipality Deputy Mayor Chaolerd Jitjumnong said the festival, known in Thai as “Loy Ruea“, is a unique cultural event that has been celebrated by villagers for many years. The Municipality, which wants to preserve the tradition, is providing the funds for it, he said.

The festival takes place twice a year on the full moon nights of the sixth and eleventh months of the lunar calendar.

Loy Ruea sees the villagers pay their respects to the spirit of the sea. Early in the morning on the final day, the villagers symbolically float their bad fortune out to sea in a boat. The event is also a chance for sea gypsy girls and boys to meet each other.

Around 4pm on the first day of the festival, villagers will build the boat and decorate it.

The next day at 10am, Rassada Municipality Mayor Surathin Leunudom will preside over the official opening ceremony.

Later there will be traditional dance performances and an ancestor worshipping ceremony at the village shrine.

The highlight of the festival will be the boat floating ceremony, which will take place around 5am on October 23. Festivities will continue throughout the day.

“Those who are interested in this unique festival are welcome to the village, but make sure you get there on time. If you want to see the boat being floated, you must come in the early morning of the last day,” said Mr Chaolerd.