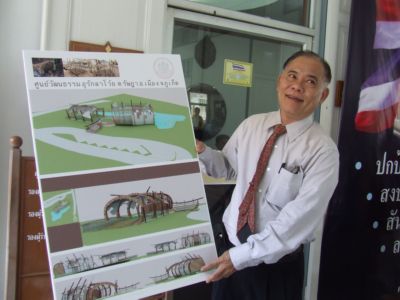 RASSADA, PHUKET: A two-million-baht cultural center at a sea gypsy village close to Phuket City has been given the go-ahead, a spokesman for the Phuket Provincial Culture Office announced on Tuesday.

Planning for the Urak Lawoi Culture Center at Ban Tukkae sea gypsy village on Koh Sireh, in Tambon Rassada, is still in its early stages and a contractor has yet to be chosen.

Phuket Provincial Cultural Officer Jantana Sittipan said design of the new facility would be handled by the Public Works and Town and Country Planning Office.

Set on four-rai off ‘Soi Tsunami’ at the village entrance, the center is to be housed in a 412-square meter building.

Initial budget for the new center has been set at 2,064,103 baht, provided by the central government by way of Phuket’s Provincial Office.

Facilities will include a stage for traditional performances, souvenir shops and demonstrations of how sea gypsy handicrafts are made.

They are especially admired for woven fish traps and other articles associated with traditional life on the sea.

Mr Anukul did not say when construction might start, saying only that “after a contracting firm is selected, it won’t take long to get underway.”

Urak Lawoi are the most numerous of the remaining sea gypsy groups in Phuket, and Ban Tukkae village is the largest sea gypsy village on the island.