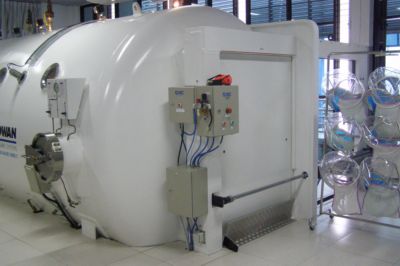 HBOT patients spend periods inside a ‘hyperbaric chamber’ – the same sort of high-pressure oxygen chamber commonly used by divers for decompression and treatment of the bends.

Parents of children who have completed a course of HBOT at Vachira have reported dramatic improvements in their children’s abilities and behavior.

Mongkol Pongpramul, whose 4-year-old son ‘Nun’ underwent the course, said, “I’m very satisfied with his development. He used to speak slowly, and just one word at a time, but now he speaks in short sentences,” he said.

“She never used to write or draw anything. She was always running around and wouldn’t listen to me,” she said. “Now she sits and draws paintings of her father, mother, flowers and butterflies.”

Vachira Phuket is the first hospital in Thailand to treat autism with HBOT.

The children spent one hour in the hospital’s hyperbaric chamber every day for 40 days.

All showed dramatic improvements in their condition in terms of decision-making, social skills and language skills, Dr Jessada said.

A new batch of eight children are now undergoing the treatment, she said.

While there is no cure for autism, common treatments include medication, diet management, sensory stimulation and psychotherapy.

HBOT is a new treatment which some have claimed produces dramatic improvements in the behavior and abilities of autistic children.

A study this year by BMC Pediatrics showed children who received 40 hours of the treatment became less irritable, more responsive when spoken to, more sociable and made more eye contact than those who were not treated.

Dan Rossignol, co-author of the study, told Scientific American it wasn’t clear why the therapy appeared to work.

“The pressure may reduce inflammation believed to restrict blood flow to regions of autistic children’s brains that control speech, or improve its ability to absorb oxygen,” he said.

HBOT is not without its detractors, some of whom claim it is a ‘quack’ treatment with little but anecdotal evidence to prove it works.