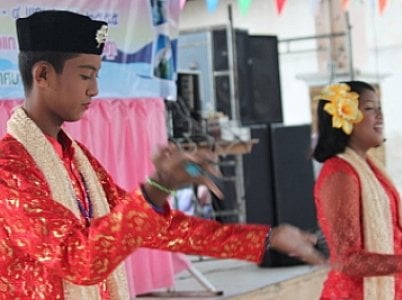 PHUKET: Preparations for the first of the twice-yearly sea gypsy Loy Reua festival are underway at Laem Tukkae on Koh Sireh, on the east side of Phuket Town.

The festival is renowned as a celebration of local culture during which sea gypsies build a boat by hand and adorn it with garlands, then place inside it personal items and set it adrift as an offering to their spirit of the sea.

“The ceremony is to bring good luck to the village and to ensure a good fishing season to come, and also to show respect to the ocean,” said village head Suthon Pramongkij.

“As part of the age-old tradition, the replica boat is adorned with flowers, and furnished with items of clothing and even hair and nail clippings taken from the villagers,” he added.

Having spent yesterday preparing the ceremonial boat, the sea gypsies will parade the brightly painted vessel, loaded with all the worries of the village, along the beach tomorrow afternoon.

The boat parade will be followed by rong ngeng dancing, a traditional dance performed by sea gypsies throughout southern Thailand.

The final act of the ceremony will be early on Sunday morning when at about 5am the ceremonial boat will be floated out to sea.

No lifeguards on beaches as Phuket enters surf danger season