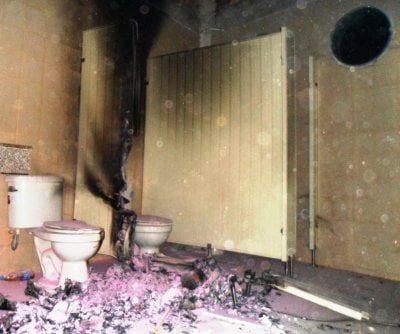 PHUKET: Phuket City Police believe that a fire at the Austria-Phuket Community Center in Rassada in the early hours of this morning was started by a group of teenage drug addicts known to frequent the area.

It was the second time the center had been set on fire within a month.

Phuket City Police received a report at 1:10am from residents who live near the center.

The reports claim that two male teenagers were seen causing damage to the community center building and starting a fire in the ladies’ restroom on the second floor.

Lt Charoonpong Sainoi of Phuket City Police and other officers rushed to the scene, where they met up with Rassada Community Volunteer Police and Kusoldharm Rescue Foundation workers, who had successfully doused the blaze with fire extinguishers.

The initial police investigation revealed that the fire in the ladies’ restroom had caused damage to the ceiling, doors, cubicle walls and toilets.

From drug-related paraphernalia recovered at the scene, Phuket City Police Superintendent Chote Chitchai believes that the fire was started by teenage drug users.

Local residents had previously reported to police that a group of teens habitually loitered around the center.

Neighbors in the area also reported to police on April 21 a fire starting in the center’s storage room. That fire is believed to have been started by the same teenage gang.

A Phuket City Police forensics officer is to conduct a more detailed inspection in order to confirm the cause of the fire.

The Austria-Phuket Community Center was set up in the aftermath of the 2004 tsunami to serve as a child care center, a basic health care center linked to the nursery, a handicraft center, a public library, a skills training center and a public park for the impoverished .community living in the area.