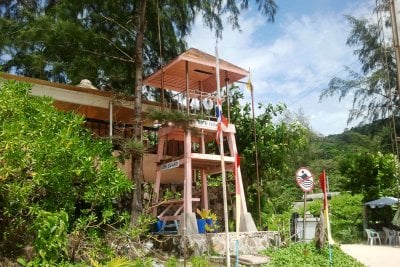 PHUKET: As the southwest monsoon sets in and Phuket enters the most dangerous period for beach swimmers, the Phuket lifeguards have yet to return to their towers at popular tourist beaches along the west coast.

The news comes as the Phuket Gazette today received confirmation that not a single company or organization bid for the government contract to provide lifeguard services at Phuket’s beaches.

It was the second time that no one bid for the contract to provide life-saving services at Phuket’s key tourist attractions since the previous agreement with the Phuket Lifeguard Club expired on April 2.

“We opened electronic bidding twice but received no bids from any organizations to provide lifeguard services. The second bidding process ended April 26.” an officer at the Phuket Provincial Administration Organization (OrBorJor) Tourism and Sports Department told the Gazette.

“We are now winding up the second round of electronic bidding. We will call in the lifeguard companies [who provided the lifeguard services previously] to see if we can come to an agreement,” she added.

Phuket Lifeguard Club President Prathaiyut “Nut” Chuayuan previously explained to the Gazette that the main areas of concern for the lifeguards were funding and a lack of support to develop professional training to ensure qualified lifeguards patrol the beaches.

“Last year was tough. We’re exhausted and some of us want to take a rest. I think it would be fair if the OrBorJor opened the bidding process to others. But if they can’t find anyone to carry on the service, we will do it. Our top priority has always been public safety,” he said.

However, the OrBorJor officer the Gazette spoke to today said, “We are doing the best we can in accordance with official procedures. If we can come to an agreement, we will pass the new contract on for presidential approval.”

The delay also comes despite assurances by the recently re-elected Phuket OrBorJor President Paiboon Upatising stating in the run-up to the April 7 election that getting lifeguards back on the beaches was a priority.

The officer the Gazette spoke to today said, “It really depends on readiness of the interested companies, but I don’t think it will take longer than a month. However, we can’t promise a date of when lifeguards will be back on duty.”