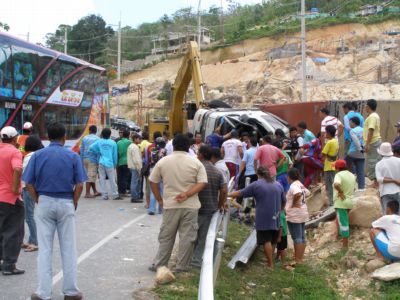 PHUKET: At least two people are dead and many more injured after a truck overturned in Kamala this morning and a tour bus slammed into a house in Patong yesterday evening.

About 9 am today, a 10-wheeled truck carrying mattresses from Bangkok to Phuket overturned on a hill in front of the Kamala Falls condo project site.

Lt Col Warit Jado, Duty Officer at Kamala Police Station, rushed to the scene with other officers and Kusoldharm Foundation staff after being notified of the crash.

One of the two passengers who were asleep in the cab at the time died in the accident. Identified only as “Yantra”, the man was pinned under the wreckage and died at the scene.

The other passenger, identified only as “Yeesa”, was rushed to Patong Hospital for treatment. He was seriously injured but still conscious, Lt Col Warit said.

The driver, Wangsen Yeemeng, 35, escaped with only minor injuries. He will be fined with negligent driving resulting in death, he added.

Wangsen told the Gazette that he and the other two men had just arrived in Phuket from Bangkok, having spent Sunday night in Tab Phut district, in Phang Nga.

“I tried to wake my friends up before the accident happened, but they kept sleeping. After the truck overturned, I first had to find a way out of the wreckage,” he said.

Around 6:30 last night, the brakes on a Daraporn Transport tour bus failed as it was entering Patong. The bus plowed into a sedan car in front of it and into an abandoned house opposite Wat Patong.

At least one person has been confirmed dead and at least 15 others injured, including one victim who will have a leg amputated.

Patong resident Simon Rooke of England, one of the hundreds of people caught in the resulting tailback that stretched all the way over the hill to the go-kart track in Kathu, told the Gazette it would be a miracle if only one person died in the crash.

“There was glass everywhere, people everywhere and a coach half on road and half in the housing plot,” he said.

“I assume the coach was coming into Patong alongside the temple, then braked before taking the corner. The brakes must have failed, causing it to veer straight through into the end of Pisit Gorani Rd,” he said.

“Seeing the carnage when driving past I said to my mate that there could probably be at least 10 dead in that…. mostly motorbikes waiting at the intersection waiting to go up the mountain…

“Had it been a weekday, it would have been much worse,” he said.

“I think it’s way overdue that they enforce mandatory maintenance tests and checks for commercial vehicles, as it is these vehicles that are causing these terrible accidents,” he added.