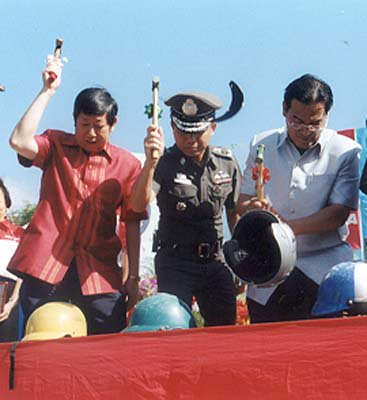 PHUKET TOWN: More than 500 motorbike riders turned up at Saphan Hin yesterday to pick up free crash helmets and listen to a road safety speech given by Deputy Transport Minister Nikorn Chamnong. The event was part of a government “Turn on your light, put on your helmet” campaign to increase road safety awareness in the 20 provinces with the worst road accident figures. Although Phuket roads are generally acknowledged as being among the most dangerous in Thailand, K. Nikorn Chamnong expressed satisfaction with the commitment of the island’s people to improving road safety. The Deputy Minister said he had noticed an increased number of motorcyclists wearing crash helmets and driving with headlamps on during daytime. “I would like to thank Phuket people for wearing helmets and turning on their lights,” he said. “I hope we can get similar results in other provinces.” While the wearing of crash helmets has always been required by law for motorcycle riders, the government has only recently recommended that headlamps be switched on during the day. The recommendation followed a Japanese study that showed the practice cut motorcycle accidents by about 40%. K. Nikorn said that, from the middle of next year, all new motorbikes sold in the country will be required to have “always on” headlights that switch on as soon as the motor is started. After distributing helmets donated by Yamaha, Honda, Suzuki, and Kawasaki, K. Nikorn demonstrated the danger of donning sub-standard headgear by smashing several low-quality helmets to bits with hammers. Several schoolboys were invited on-stage to try smashing the higher-quality regulation helmets, but to no avail.