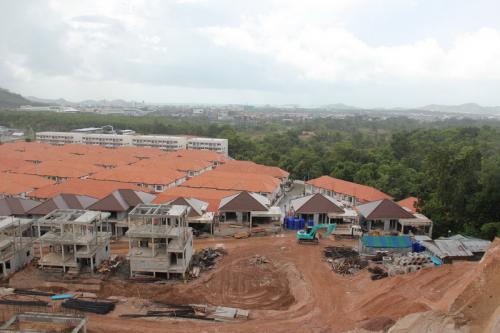 PHUKET: A team of Ministry of Interior officials landed in Phuket yesterday to raid four sites in and around Patong, all of which are now under investigation for illegal construction.

Leading the raids was Lt Gen Jutti Thammanovanich from the Office of the Commissioner-General of the Royal Thai Police, ranking him among the top police commanders in the country.

Joining him were Phuket officials from the Land Office, the Damrongtham Center (provincial ombudsman’s office) and the Patong Police.

“The team was assembled to inspect land in Phuket after we received complaints of construction on steep hills. We have found that the land plots in question were being developed for housing, resort and hotel construction,” Lt Gen Jutti said.

The first site raided was in the hills off Muang Chaofa Road, which links the Prince of Songkla University Phuket campus in Kathu with Chalong.

“We found they had a permit to develop the land for housing. However, it is illegal to do such construction on slopes of more than 30 degrees,” Lt Gen Jutti said.

The second site raided was in Baan Nanai, on the hills behind Patong.

“The backhoe driver and the site manager were asked to come to Patong Police Station for questioning. The police will conduct the investigation from here,” he added.

The third site raided was at Paradise Beach, south of Patong Beach.

“We received a complaint that a private street was under construction on SorPorKor land leading to a private resort. We have ordered the Land Department to investigate and confirm the status of land ownership,” Lt Gen Jutti said.

“At the fourth and last site raided, located opposite Laem Singh Beach, we found a concrete street built over a public waterway. Also, the road was clearly built on a slope greater than allowed by law,” he stated.

“I have been informed that this issue is now being handled by the Damrongtham Center. The center has requested the local municipality to destroy the street,” he said.

Gen Jutti said his team would continue their investigations into the four cases.

“The complaints we received were accurate. We have collected the information we need to investigate who is involved in this wrongdoing,” he said.

“We will investigate officials who issued the land documents and the permits to allow such construction on steep hills. Everyone found to be involved in these illegal activities will be held accountable,” he added.