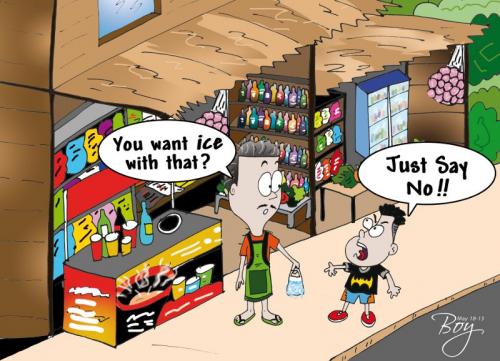 PHUKET: Dr Ruangsit Netnuanyai, the psychiatric social worker who runs the drug treatment center at Vachira Phuket Hospital, is absolutely right that more needs to be done to prevent youths from falling into the potentially fatal trap of drug abuse (story here). As he notes, this effort should start with the most commonly abused substance among young Thais: methamphetamine, known locally as ya bah.

Dr Ruangsit knows all too well the dangers of long-term abuse of this powerful stimulant, which was first manufactured and used on a massive scale by the Nazi war machine to fuel its blitzkrieg attacks across Europe during World War II.

A low point for the Kingdom came back in the late 1990s, when hardly a day went by without reports of a meth-crazed lunatic holding somebody hostage at knifepoint, threatening to commit suicide or engaging in some other kind of insane or irrational behavior. The reason for this epidemic abuse: the price of ya bah pills smuggled in from Myanmar had fallen extremely low levels; so low that farmers were actually feeding them to buffalo to get them to work harder, according to some media reports.

So bad was the situation that public support was strong in early 2003 for Thaksin Shinawatra’s infamous War On Drugs.

That was until a wave of unexplained murders, thought by many to have been government-ordered extrajudicial killings waged under the banner of the War on Drugs, started to take place across the country and brought Thailand deservedly harsh international criticism from human rights groups.

One notable casualty here in Phuket was a four-year-old girl named Benz who was shot in the shoulder in a restaurant near Suan Luang (Rama IX, also known as King’s Park). As in many of the incidents at the time, the two shooters arrived together by motorbike during government work hours – and the case was never solved.

Since that time, the meth-buse problem has persisted, though easier-to-conceal and more powerful crystal meth has to a large extent replaced ya bah pills, at least according to monthly seizure reports released by police.

As Dr Ruangsit wisely states, the only way to really end Thailand’s entrenched meth epidemic is to keep youngsters from ever trying the highly addictive substance in the first place. Threats of criminal punishment are seldom effective deterrents for curious youths, especially here in Thailand where they learn from an early age that much of what they are told by authorities can be taken with a grain of salt.

Youths need to be taught that meth, like other abused substances, has a built-in payback effect and that there are no “free rides” in nature.

The best people to explain this to them are not police, but people who have overcome meth addiction themselves.

Phuket Opinion: For the Love of Bob