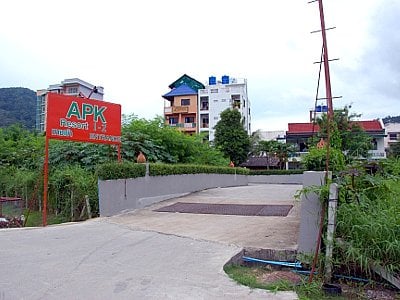 PHUKET: A 98-room resort in Phuket will face legal action for building an access road over a small waterway – even though the resort had written permission from the Patong Mayor.

Yet the same Phuket resort has been given a reprieve for operating without a hotel license.

The news came during an inspection visit to the APK Resort & Spa yesterday by a team of officials led by Phuket Vice Governor Somkiet Sangkaosutthirak.

The public area in question is a stretch of road five meters wide and 80 meters long, built over a small canal that runs alongside the resort.

Sompol Khwanyuen, Director of the Patong Municipality Public Works Division, explained to the Vice Governor that the road was built without a formal building permit, but that the developer did have written permission from Patong Mayor Pian Keesin.

“Mayor Pian allowed the road to be built – but only on the condition that the road would be available for public use as a link between Phang Muang Sai Khor Road and Ratchapatanusorn Road,” he said.

However, V/Gov Somkiet said, “I understand that Mayor Pian was trying to do a good thing, but he simply did not have the authority to do that.”

Mr Somkiet explained that the resort came under scrutiny after Patong residents filed a complaint with the Ministry of Interior in 2009.

The complaint claimed that Patong Municipality gave APK Resort certain “advantages” by allowing them to construct the road over the canal as a private entrance to the resort.

The inspection tour yesterday followed the Ministry of Interior issuing a fourth warning letter to the Phuket Provincial Office over inaction to the complaint filed in 2009, he said.

“The Phuket Land Office will confirm which type of waterway the canal is. If it is deemed to be a ‘canal’, the Phuket Marine Office will file a complaint with the police.

“But if it is deemed a ‘public waterway’, then the Kathu District Office will file a complaint with the police,” said V/Gov Somkiet.

After the complaint for encroaching on a public area is filed, the police will investigate and legal proceedings will follow, he added.

The vice governor also suggested that the resort make amends by appealing to Phuket Governor Tri Augkaradacha to give special permission for the road to stay.

“The governor has the authority to present this to a special committee which can then allow special permission for the road to stay,” he said.

While inspecting the resort’s permits, the team discovered the property was operating without a hotel license.

“If they ignore the written warning, we’ll shut them down,” he said.

“I will report all this to my boss, and we will follow the vice governor’s suggestions,” she said.