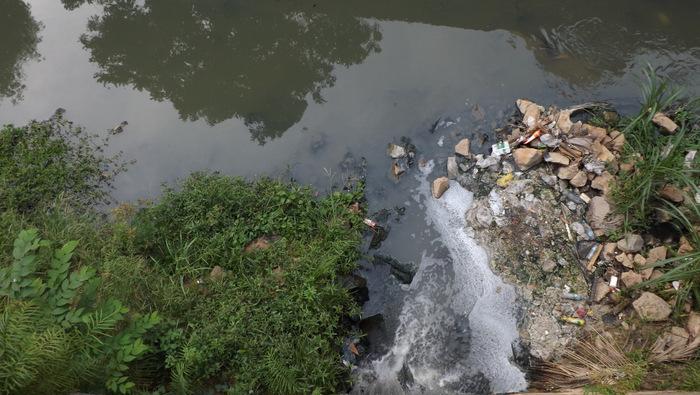 PHUKET: Governor Maitri Inthusut has warned residents and restaurant owners in the Soi Paniang area, north of Phuket Town, that they will be prosecuted if they are caught releasing untreated waste water into the Bang Yai Canal.

“If Rassada residents are so concerned about environmental standards, they shouldn’t release untreated waste water into a public waterway,” he told a community meeting on Saturday.

Governor Maitri called on officers to inspect houses and restaurants in the area to ensure they are fitted with septic tanks.

“Any persons found releasing untreated waste water into the canal will be warned. If they are caught a second time, they will be prosecuted,” he said.

Taking polluters to court was just one element in Governor Maitri’s strategy for cleaning up the canal.

“We must add EM [Effective Microorganism] balls to increase oxygen in the water. This will help to break down contaminants quickly,” he said.

“We must also install pump stations along the canal to ensure the water moves along and does not become stagnant.”

Governor Maitri explained that Rassada Municipality had signed a Memorandum of Understanding (MoU) with the Wastewater Management Authority of Thailand (WMA).

The MoU empowers the WMA to begin studying pollution in the area in the hope of deriving clear solutions to the problem.

Karon Municipality, in combating its “black water” problem, signed a similar MoU with the WMA on March 13 (story here).

Rassada Municipality has set aside 14 million baht to build an overflow sandbag dam in the canal that would retain sediment, which could then be dug out.

“We must also secure a budget to build an approved waste water treatment facility to prevent further damage to the environment,” he added.

Phuket City Wastewater Treatment Chief Chakkrit last year was already considering installing waste water treatment plants to ensure that the canal’s water quality remained at safe levels. The plan arose after polluted water in the canal formed a stench so overpowering that it had made people physically ill.

Residents suffered serious headaches and bouts of nausea, with many of them vomiting (story here).

The project was likely to cost upwards of 60 million baht.

“We are aware of the problem and we are trying everything we can to solve it. We expect our project to be approved so that we can resolve it,” Mr Chakkrit said.

In February this year, Samkong residents again filed a formal complaint over a sickening stench emanating from the canal (story here).

That incident, initially blamed on a noodle factory, was later attributed to raw sewage from the Soi Paniang area being emptied into the canal.

“It is not from the private factories in the area,” said Jarun Nongsook, an engineer at the Phuket Provincial Industrial Office (story here).

After hearing residents’ complaints in February, the Governor proposed a multi-pronged solution to the polluted canal that included dredging drainage ditches and lining them with cement; oxygenating the water; putting EM balls into the ditches; enlarging sewer pipes in Rassada; and encouraging restaurants, companies and residents in the area to install their own waste water treatment tanks to help reduce the average biological oxygen demand in the water.

Those calls seem to have gone unheard, a factor Governor Maitri is now looking to rectify.

“Relevant officers should regularly inspect all water sources along Soi Paniang and consult with residents to gain local knowledge in finding sustainable solutions to keep the community clean,” he said.