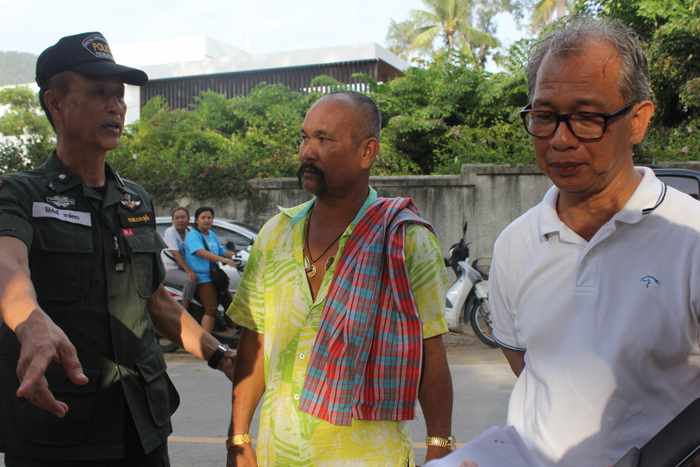 PHUKET: More than 100 Phuket residents gathered for three hours yesterday to halt the construction of a fence along Kata Beach, on land adjacent to Club Med Phuket, arguing that it was encroaching on public land.

“We don’t understand how someone can build on this land; it is along the beachfront,” said Karon resident Wichit Yaowarot.

“We want officials to investigate for possible land encroachment. If the land is legally owned, we will not protest it, but we believe this is public land.”

Karon Subdistrict Chief (Kamnan) Winai Chidchiew was called to the site to mediate between residents and landowners, but after two hours of unresolved negotiations he called in reinforcements.

“I did not know how to resolve the situation, so we called Karon Police and the Muang District Chief to help,” said Kamnan Winai.

Muang District Chief Parkpoom Intarasuwan halted construction of the fence until ownership of the land could be proven and relevant documents and land titles could be verified.

“We will investigate for possible land encroachment and check the Chanote title. Until then, construction must stop,” he said.

“If the land is legally owned, they have the right to continue building. If illegal, the structures must be dismantled.”

The fence was being erected by GMR, the company that owns part of the land that Club Med rents, said Pracha Jaidee, one of GMR’s lawyers.

“We wanted to build the fence here so the boundaries of our land are clear,” he said.

Mr Pracha noted that GMR legally bought the disputed land 30 years ago and has the Chanote title to prove it.

“There used to be a hotel in this very area, but it was destroyed in the tsunami. Now, GMR is building on its own land and being accused of encroachment,” said Mr Pracha.

“If officials want to halt construction so they can check legalities, so be it. The project will restart once they verify the Chanote.”

Protesters finally dispersed after Mr Parkpoom promised that land titles would be investigated and that a public meeting would be held so that residents, GMR representatives and relevant officers could further discuss the situation in a neutral setting.

The date of this meeting has yet to be set.