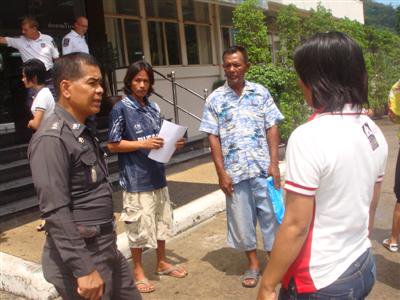 KOH KAEW, PHUKET: Hundreds of villagers in Phuket claim they have been cheated out of their homes by an unscrupulous loan company.

The victims, mostly from Saensuk Village in Koh Kaew, say the company is demanding tens of thousands of baht to buy their homes back – and threatening to throw them out on the streets if they don’t comply.

One of her neighbors came to her door with another woman, both claiming to represent a company offering low-interest loans.

She was told she could borrow money at 7% interest and have it within two weeks.

As the loan would have to be guaranteed with her land and home as surety, she had to provide her ID card and house registration, she was told.

She gave the women her documents and they left. Later the woman from the company returned and took a photograph of Ms Wannee’s house.

“She said she needed 3,000 baht commission. I wasn’t happy, so I didn’t take the money and asked for my documents back,” she said.

The woman promised to return the documents, but never did.

Shocked, she went to see the neighbor who had accompanied the woman from the company on her first visit.

She was shown a ‘purchase contract’ document that showed she had sold her house and land to the company for 79,000 baht.

She was also shown a ‘rental contract’ that said she had been renting her house from the company since October 5, 2009. The document listed the rent as 4,900 baht per month.

“I have no idea where those contracts came from. At the bottom they had my name and a signature, but I never signed them,” she said.

Ms Wannee complained to Phuket City Police, who say they have heard similar claims from at least six other households in the same village.

Duty Officer Eakkasit Pinkaew said, “Some of the cases are different because they took money from the company or signed contracts, but the amount of money they received and the amount on the documents are different.”

Phuket City Police have passed the case on to the Phuket Provincial Office, who will investigate the dispute.