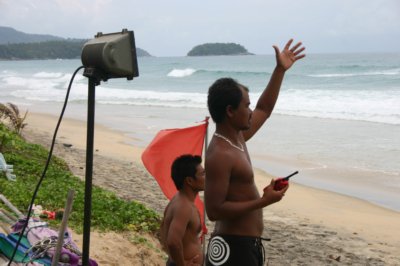 PHUKET: Rescuers this morning recovered the body of a 15-year-old boy who on Sunday became caught in an undertow at Karon Beach and drowned.

The rescue volunteers from the Phuket Ruamjai Foundation discovered the body of Pattharadanai ‘Ooad’ Kampong at 4am, less than one kilometer from the spot the boy was last seen.

The boy’s father said on Monday that the foundation, having not yet located the body, called on a local clairvoyant to assist them in the search.

“The clairvoyant conducted a ceremony at the beach on Monday morning and told us that the body was still trapped under the waves at the time but would be washed ashore at four o’clock and found within a kilometer of the spot where he drowned,” he said.

Father killed in bid to save couple wired for death